Chaotic scenes across Greece as banks open for pensioners 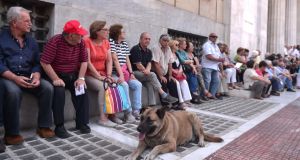 Pensioners sit in front of the Bank of Greece’s headquarters in Athens as they wait withdraw cash from their state pensions. Photograph: Louisa GouliamakiI/AFP/Getty Images

The chaotic scenes outside a thousand or so Greek banks yesterday, which were allowed reopen for the rest of the week so pensioners with deposit books would be able to withdraw up to €120, underline how sensitive an issue pensions are for Alexis Tsipras’s government.

At many branches, pensioners, some of whom had been waiting for hours on the street, clamoured for access as doors opened. Two of the country’s four banks sought to control the crowds by issuing queue numbers, while the other two said they would serve customers alphabetically over the three days, starting with surnames beginning with A to I.

Pensions have been one of the biggest bones of contention between Athens and its lenders in the negotiations on the country’s financial path.

According to the government’s pension database, set up two years ago, the average monthly pension payout is now €713 before tax. On top of that, some pensioners receive a supplementary pension, based on contributions made solely by them as employees, which averages at €169 a month.

Starting in 2010, pensions were cut by up to 44 per cent for those in the private sector and by a maximum of 48 per cent in the public sector over three years.

But despite these cuts, the severe, austerity-fuelled contraction of the economy by a quarter has meant state spending on pensions as a share of gross domestic product has actually risen from 11.7 per cent before the financial crisis to 16.2 per cent, pushing it above the EU average of about 12 per cent.

They also proposed measures that would see pensioners pay more in health contributions (increasing from the current 1 per cent for primary and zero for supplementary pensions to a standard rate of 6 per cent). More controversially, the lenders demanded the phasing-out of a supplementary benefit for low-income pensioners.

But given Greece’s pension dependence due to the lack of a proper social welfare system and record unemployment levels, any further cuts would be felt across swathes of society, as suggested by a recent survey that found some 52 per cent of households say pensions are their most important source of income.