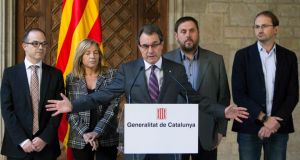 Catalonia’s president Artur Mas, with other regional party leaders, speaks during a news conference on Thursday announcing the date for a referendum on Catalan independence referendum. Photograph: Reuters

The leaders of Catalan pro- independence parties have agreed on the content and date of a referendum they plan to hold next year on breaking away from Spain, keeping the region firmly on a collision course with the central government.

After two days of discussions between the parties, Catalan regional premier Artur Mas announced yesterday that the vote will be held on November 9th, 2014.

“This has great historical importance,” Mr Mas said of the agreement. It will be voted on by the Catalan regional parliament, which pro-independence parties control.

Mr Mas added that those parties “are fulfilling the commitment to stage the referendum in 2014. November 9th allows us to do so successfully. There will be time to guarantee the legal frameworks and democratic procedures.”

The regional premier’s own CiU coalition and the Catalan Republican Left (ERC) have been the political driving forces behind the referendum plan and the ICV greens and left-wing CUP parties also signed off on the accord.

The campaign for independence has gathered speed since the autumn of 2012, when prime minister Mariano Rajoy refused Mr Mas’s request for a revision of Catalonia’s economic relationship with Spain. Separatists say the region contributes much more to the Spanish treasury in tax revenue than it receives in investment. They also cite political meddling in Catalan affairs by politicians and courts in Madrid as another incentive to break away.

Recent polls show that a narrow majority of Catalans would vote in favour of independence.

However, the two-part question is less strident than some pro-independence factions wanted. It appears to keep the door open to a federal “third way” solution advocated by some, while placating some less independence-minded members of the CiU coalition.

ERC leader Oriol Junqueras said yesterday he had wanted “a Scottish-style” single question on independence, but that compromise had been necessary.

The central government in Madrid reiterated its firm opposition to any such referendum, on the grounds that it would lack legal foundation.

“I want to say with all clarity that this referendum will not take place,” said Mr Rajoy.

“It is unconstitutional and it will not take place. What some parties have proposed goes radically against the constitution and the law.”

The referendum announcement came just hours after the beginning of a symposium in Barcelona which has sparked a political storm.

The title of the three-day event, Spain against Catalonia: a Historical Perspective, has drawn criticism from some historians and enraged anti-independence politicians.