Catastrophic forest fires in central Portugal have claimed dozens of lives. Many of the dead were trapped in their cars as they tried to flee. Video: Reuters

Burnt cars and body bags are seen on the on the N236 road between Figueiro dos Vinhos and Castanheira de Pera in Portugal after a forest fire that killed at least 57 people. Photograph: EPA

A forest fire is seen from the village of Bouca, near Pedrogao Grande, in central Portugal on Sunday. Photograph: Reuters

Flames are seen close to a road during a forest fire in Pedrogao Grande. Photograph: EPA

Firefighters try to extinguish a vehicle on fire in Portugal. Photograph: EPA

A smoke rises above trees during a forest fire in Pedrogao Grande. Photograph: EPA

A firefighter helps a woman during a forest fire in Pedrogao Grande. Photograph: EPA

Raging forest fires in central Portugal have killed at least 62 people, many of them trapped in their cars as flames swept over a road.

Nearly 60 other people have been injured, including four firefighters, in what prime minister Antonio Costa described as “the biggest tragedy of human life that we have known in years”.

A lightning strike is believed to have sparked the blaze in the Pedrogao Grande area after investigators found a tree that was hit during a “dry thunderstorm”, the head of the national judicial police said.

Dry thunderstorms are frequent when falling water evaporates before reaching the ground because of high temperatures.

Authorities had previously said that temperatures which have soared to 40 degrees in recent days might have played a part in the inferno, centred about 95 miles north-east of the capital Lisbon.

A huge wall of thick smoke and bright red flames towered over the top of trees near houses in the wooded region.

About 700 firefighters have been trying to put out the fires since Saturday, Interior Ministry official Jorge Gomes said. 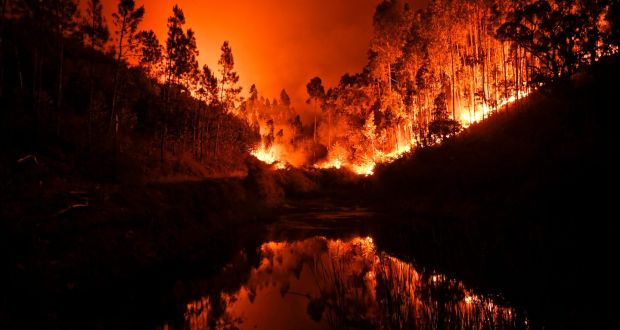 No information has yet been given on how the others were killed.

Local television showed terrifying images of several people on a road trying to escape the intense smoke that had reduced visibility to a few metres.

Mr Costa said firefighting crews are having difficulties in approaching the area because the flames are “very intense”.

He added that Portuguese authorities are working on identifying the victims, and Spanish rescuers are assisting in efforts to control the blazes.

Valdemar Alves, mayor of Pedrogao Grande, said: “This is a region that has had fires because of its forests, but we cannot remember a tragedy of these proportions.

“I am completely stunned by the number of deaths.”

Spanish prime minister Mariano Rajoy tweeted that he is “overwhelmed by the tragedy at Pedrogao Grande. The Portuguese people can count on our solidarity, support and care”.

Pope Francis led thousands of people in a moment of silent prayer for the victims of the fire.

He referred to the “devastating fire” at the end of his Sunday prayer, delivered from his studio window overlooking St Peter’s Square in the Vatican.

The crowd fell silent and Francis bowed his head to recall the “many victims” of the blaze.

Breakthrough between EU and UK possible if there is will, says Taoiseach

4 Breakthrough between EU and UK possible if there is will, says Taoiseach