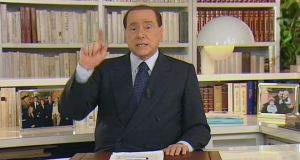 Two hours before a parliamentary committee was due to consider his possible expulsion from the Italian senate, centre-right leader Silvio Berlusconi last night got in his retaliation first.

In a TV “message”, he called on Italians to “react” and to “protest” against the subversive, anti-democratic intentions of a politicised judiciary, which he said was the expression of leftist “envy, hate and resentment”.

Mr Berlusconi’s speech immediately prompted an angry reaction from the Democratic Party (PD), currently in a coalition government with his People of Freedom (PDL) party.

1994 speech
The speech appeared to deliberately mirror his famous January 1994 TV speech in which he announced his imminent “taking to the field” of politics with his new Forza Italia party. And towards the end of his 16-minute talk last night, Mr Berlusconi announced the rebirth of Forza Italia.

In 1994, his speech had signalled the start of a victorious electoral campaign. Last night’s address, too, appeared to herald an imminent return to the hustings. Even though he issued no threat to the Enrico Letta-led PDL-PD coalition, the revival of Forza Italia means that, sooner rather than later, he will pull the plug on the PDL-PD executive.

Protested innocence
Predictably, much of his address concerned judicial matters. Mr Berlusconi faces expulsion from parliament because Italy’s supreme court last month sentenced him to four years in prison, plus a three-year ban from public office, for tax fraud by his Mediaset TV company. Yet again, he protested his innocence, arguing that he was the victim of a left-wing political witch-hunt.

“We have become a much-reduced democracy held to ransom by a politicised judiciary which, alone among civilized countries, enjoys total impunity and irresponsibility,” he said. “The judiciary has become a subversive force capable of influencing the legislature and the executive with the mission of . . . realising socialism.”

Mr Berlusconi called on “honest, sensible Italians” to “react, protest and make yourselves heard” because “this is the last call before the catastrophe”. He urged Italians to “open your eyes” and be ready to “combat this left and its political use of justice”, urging people to become “missionaries” for the new Forza Italia, a party that “defends the values of our Christian tradition”.

As for the senate committee’s deliberations on his possible expulsion, no clear decision was reached last night.