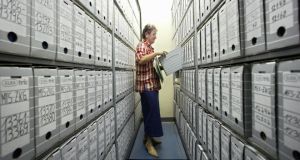 An employee of the Stasi archives searching for documents in the files department in Berlin.

For anyone who didn’t experience East Germany first hand, an irresistible place to start is the former headquarters of the Stasi, the feared secret police, in eastern Berlin.

The grey facade is as forbidding and the strip- lighting as harsh as ever. In the corner of a hallway the wood-effect, veneered cabins of the paternoster lift squeak past – one up, one down – in an endless hopeless loop. Kafka would feel right at home here.

For two decades this Stasi building has been an unholy place of pilgrimage for millions of people, while its poisonous associations dominated debate about the vanished East Germany’s legacy. And with good reason: the euphoria of toppling the Berlin Wall in November 1989 soon gave way to horror at the discovery of the full extent of the Stasi’s operating methods, in particular a dense surveillance network with one official employee or unofficial informer for every 65 citizens.

The Stasi became a synonym, even a brand, for the insidious paranoia of the East German regime, typified by an old sign still hanging on the wall: “We must know everything.” But the irresistible magnetism of the Stasi story has also created a distortion field around the way East Germany is remembered.

For Roland Jahn, this is a dilemma. Three years ago the 61-year-old former East German dissident and campaigning journalist became the third custodian of the Stasi files, all 887 million pages of them, which were opened to German citizens in 1992. The momentous decision to make them accessible was far from a given at the time, but Mr Jahn says it was a crucial element in dealing with the past.

“Open files are not there to open old wounds but to allow old wounds to heal,” he says.

Still, like many former East Germans, he worries that the Stasi Records Agency has become a victim of its own success, and that the Stasi is the default lens through which all life in the East German state is now viewed.

“Everyday life in East Germany did not always inevitably involve the Stasi, and there are times I wish we had a little more talk of other aspects, like the ruling SED party,” says Jahn.

“There were people who had an okay life in East Germany, and those who felt it was a prison. Our challenge is to see this as a whole.”

In his book-filled office in a former East Berlin brewery, the journalist-turned-publisher Christoph Links counts on his fingers the three periods to date in the public debate.

Immediately after 1989, he says, the shock over the Stasi revelations forced an onerous but necessary examination of state repression. He believes that this handed a welcome stick for West Germans to beat the east and its citizens.

This first phase triggered a backlash from around 1999, involving a wave of eastern nostalgia dubbed “Ostalgia”. In this period, many ex-easterners embraced any cult objects, or films such as Good Bye, Lenin! (2003), that restored some legitimacy and dignity to their memories of their past.

After these two extremes, Links believes the pendulum has come to rest in a calmer, more differentiated middle ground.

“Many western Germans now realise it was possible for East Germans to respect certain aspects of their country and criticise others,” he said. “There were hardliners and liberals in East Germany, progressive periods and phases of real dictatorship. Today the 17 million former East Germans no longer feel they have to justify to West Germans why they didn’t just leave.”

The appetite for a more nuanced debate is clear in the titles recently published by Links. From urban planning to modern literature, there is a new push to view as a historical whole the previously distinct histories of West and East Germany.

Three winners of the Frankfurt Book Fair’s top prize since 2005 have been from eastern authors, writing bestselling literary explorations not of why East Germany failed but of why it kept going for so long.

“No one was just a rebel or just a conformist in East Germany,” he said. “Reflecting on life in East Germany means shining a light on the mechanisms that affected us, not judging those who conformed.”

The socialist state involved both affordable living and everyday surveillance; guaranteed employment and collectivisation. East Germans escaped public pressure to conform by escaping into private niches. Older eastern German visitors to the exhibition are enthusiastic about a display that finally addresses the black, white and grey of their former lives.

For 71-year-old Irene Melzer, the exhibition brings back the doublethink and doublespeak of public and private life. Further bad memories are piped through loudspeakers as an East German children’s choir sings unsubtle socialist promises of a better tomorrow,

“I get the shivers when I hear those songs,” says Melzer, a pastor’s daughter who was refused permission to study by the atheistic authorities. For decades she was involved in church circles and determined to reform East Germany. In 1989 she “cried her eyes out” when her daughter fled west via Hungary.

After unification, Melzer opened Lutheran schools in eastern Berlin and, like 17 million other East Germans, learned how to live in an entirely new system.

“We all felt so small after 1989, that we had nothing to contribute,” she says. “But over the years we’ve started to realise we had good things, worthwhile experiences among the terrible things.”

As 1989 retreats ever deeper into history, Germany seems ready to break out of entrenched attitudes to the past. That is the aim in Berlin’s Gethsemane Church, a redbrick structure in the eastern district of Prenzlauer Berg, and a focal point of 1989 citizen protest. Eye-witnesses from 25 years ago have worked with students on an evening of stories, choreography and audience questions such as: “Were you not afraid?”, “Do you love orders more than people?” and ”Where did you get your courage?”

Sitting in a pew, Benita Stroner, a demonstrator here in 1989, relates how she was often followed home from the church by the Stasi, how her apartment was searched regularly, and how she later found listening devices there.

The 67-year-old has fond memories of 1989, though she remembers the atmosphere in the church, besieged by armed soldiers and police, as one of “cold, fear and uncertainty. I wasn’t afraid, I’m not that type,” she says. “Like the many women in the Gethsemane group – and there were really a lot of women – I just wanted a better life for my children.”

Sitting on the church altar, the local teenagers discuss everything they have learned from the project, including the fact that the decisive push in 1989 came from ordinary people like their parents and grandparents.

“I didn’t realise until this project how many courageous people there were back then,” says Celia, 15. “And I didn’t know until now that they were protesting for a better life in East Germany, not to bring down the Berlin Wall.”

1 Health officials ‘very concerned’ about foreign travel, says Donnelly
2 World, look away now – these are dark days for the United States
3 Michelle O’Neill will not step aside ‘under any circumstances’ despite calls from other parties after Storey funeral
4 ‘Grossly irresponsible’- Waterford mayor condemns house party of 60 people
5 Bobby Storey: The IRA's planner and enforcer who stayed in the shadows
Real news has value SUBSCRIBE