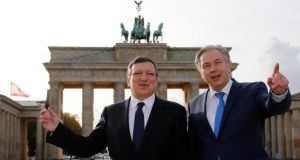 The European Commission is in danger of running out of money and failing to meet its financial responsibilities by mid-November, the European Parliament heard this evening.

Opening the parliament’s plenary session in Strasbourg, parliament president Martin Schultz said he had been contacted at 7.30am yesterday by president of the European Commission José Manuel Barroso, who was seeking urgent approval for a €2.7 billion supplementary budget for 2013.

Mr Schultz said the message was that “by mid-November the commission will no longer be in a position to shoulder its financial obligations”.

Mr Schultz said the difficulty had apparently arisen because “of a shortfall in customs duties”. He said: “I am bound to take it seriously.”

The crisis was not the fault of the EU Parliament, he added, but of European governments which had failed to put necessary resources at the disposal of the commission.

However, a number of MEPs expressed concern that their own requests for a €3.9 billion budget supplement had not yet been approved by the council, and suggested the budgetary committee ask the European Council to address a range of budget supplements, including €400 million earmarked for flood relief.

Mr Schultz said if the parliament’s budgetary committee felt it was the right thing, the parliament could vote on the supplementary budget after a special debate on Wednesday or Thursday.

A spokesman for the parliament told The Irish Times the issue of budget adjustments at this time of year was not unusual, “but this was a big one”.