Asylum seekers may be turned back if Vienna-imposed cap of 37,500 is reached 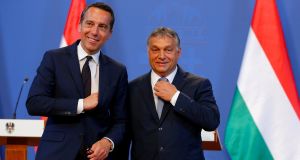 When Europe’s fault lines grow or shrink, the tremors tend to strike where Austria and Hungary meet.

In May 1989, Hungarian soldiers cut the barbed wire here to make the first holes in the Iron Curtain, and three months later they let East Germans dash across the geopolitical divide into Austria during a historic “pan-European picnic”.

They celebrated again here in 2007, when Hungary and seven other ex-communist states joined the Schengen zone, facilitating “borderless” travel through the European Union from the Baltic to the Atlantic.

Crisscrossed each day by thousands of travellers, this frontier was fading into memory until the refugee crisis struck last summer.

On August 27th last, just west of this Austrian border post at Nickelsdorf, a locked truck was found to contain 71 dead refugees, most of them from Syria.

That gruesome discovery prompted Austria to reimpose border controls to stop people-smugglers, as hundreds of thousands of refugees and migrants made for northern Europe via the so-called Balkan route.

With up to 14,000 people arriving each day from Hungary, Austria turned the Nickelsdorf truck park into a vast transit camp for the travellers.

Austrian police checks still send long tailbacks snaking into Hungary, while the Vienna government is planning to erect fences on key stretches of this border, and could even stop asylum seekers entering the country if an annual limit is reached. More than 700,000 migrants transited Austria in 2015, and 90,000 claimed asylum.

Vienna says it will allow no more than 37,500 people into its asylum system this year, and it is preparing for any possible twist in a still-unpredictable crisis.

“Our plan is to build a fence here at Nickelsdorf and at three more of last year’s ‘hotspots’, totalling about 30km in length,” said Gerald Koller, a spokesman for Austrian police in the Burgenland region that borders Hungary.

“We will also have mobile fences for any new hotspots that appear. They will not totally block the border, but allow us to channel people safely on to our territory. We don’t know if we will again see numbers like last year, but we have to be ready.”

The fence preparations and 37,500 cap are not just Austria’s way of guarding against a repeat of last year.

Along with the current border regime and the inconvenience it causes for Hungary, the measures also put pressure on Budapest to stop migrants reaching Austria and to take back many of those who have already done so.

Hungary moved to tackle the problem last month by empowering police to return any illegal migrant caught within 8km of its border fence directly to Serbia without any legal process – a move deplored by rights groups.

Yet Hungary still rejects Austria’s requests to take back Middle Eastern and African asylum seekers under the EU’s beleaguered “Dublin regulation”, by which asylum requests should be handled by the first member state that the applicant reaches.

Because crisis-hit Greece has for several years officially been deemed incapable of handling asylum cases, the responsibility for vast numbers of applicants should fall to Hungary, the next EU state along the Balkan route.

Hungarian prime minister Viktor Orban says this burden is unfair and unacceptable and, after recent talks with Austria’s chancellor, Christian Kern, he insisted his country “does not need a single migrant”, calling them “poison”.

Austria has accepted about 22,000 asylum requests this year, and is trying to send a further 9,000 people back to other countries – above all Hungary – under the Dublin rules.

If Austria was forced to take these people into its asylum system, the country’s 37,500 cap and the possibility of emergency steps would come much closer.

If the Vienna government triggered emergency measures, “police officers at the Austrian border would just have to prove whether there is any danger for the asylum applicant in Hungary”, said Austrian interior ministry spokesman Karl-Heinz Grundboeck.

“We could have developments in Africa, the Middle East and Turkey.

“We still don’t have a European perspective on this. In that regard, problems could arise quite easily.”