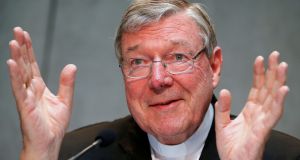 Australian cardinal George Pell, one of the most powerful figures in the Vatican, has confirmed that he was questioned in Rome last week by Australian police in relation to sex abuse allegations.

A statement on his behalf said the cardinal, the Vatican’s prefect of the secretariat for the economy, said he had “voluntarily participated” in an interview by Victoria police.

“The cardinal repeats his previous rejection of all and every allegation of sexual abuse and will continue to co-operate with Victoria police until the investigation is finalised,” the statement said.

Three policemen travelled to Rome to question the cardinal about allegations that were originally made public by an ABC TV report in Australia in July of this year.

It is believed that Victoria police’s taskforce Sano, which investigates complaints coming out of the Royal Commission into Institutional Responses to Child Sexual Abuse, has for over a year now been examining allegations by complainants from Ballarat and Melbourne, where Cardinal Pell served as a priest and later a bishop.

The shadow of clerical sex abuse allegations has long hung over Cardinal Pell. In 2002, when he was archbishop of Sydney, a man alleged that he had been abused by him in 1961 when he was 12 years old and when the future cardinal was training for the priesthood.

Cardinal Pell was cleared of those allegations at an independent inquiry but the sex abuse issue returned to haunt him last winter when he was summoned to appear before a special session of the royal commission.

At this, lawyers for the commission questioned his handling of controversial sex abuse cases. They asked whether he could seriously claim he knew nothing of the activities of a number of serial child sex abusers who passed through both Ballarat and Melbourne during his time. The commission has not yet concluded its investigations.

The sex abuse issue resurfaced in July this year when ABC reported that Victoria police were investigating multiple child abuse allegations, made directly against him and related to a period between the 1970s and 1990s.

The complaints include allegations that he touched young boys “inappropriately” while swimming with them in the Ballarat town pool in the summer of 1978-79. He is alleged to have been observed walking about naked in front of three young boys in the changing room of the Surf Life Club in Torquay in the summer of 1986-87, in the process behaving in a manner that “caused concern”.

A third allegation involves the abuse of two Melbourne teenage boys in the 1990s at the time Cardinal Pell was setting up the Melbourne Response, the Australian Catholic Church’s first attempt to seriously address clerical child abuse.

Asked for the pope’s reaction, Mr Burke quoted his comments on the papal flight back from Krakow, Poland in July, when Pope Francis had refused to either condemn or pardon Cardinal Pell, saying: “If I would give a verdict for or against Cardinal Pell, it would not be good because I would judge prematurely . . . We should wait for justice and not judge beforehand [or according to] a verdict by the press, a verdict based on gossip.”