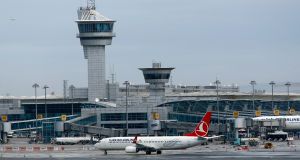 Ten people were killed in an attack on Istanbul’s main international airport on Tuesday, Turkey’s justice minister was quoted as saying by broadcaster NTV.

An attacker opened fire with a Kalashnikov rifle at the airport, NTV quoted Bekir Bozdag as saying.

A Turkish official and witnesses said there were two attackers, who blew themselves up after opening fire.

The Turkish official said the two detonated their explosives just before the security check at the international terminal.

Police fired shots to try to “neutralise” the suspects, the official said.

Around 40 people were wounded in the blast, broadcaster HaberTurk reported.

Pictures posted on social media from the site showed wounded people lying on the ground inside and outside one of the terminal buildings.

Footage from broadcasters, including CNN Turk, showed ambulances rushing to the scene

One witness told CNN Turk that gunfire was heard from the car park at the airport. Taxis were ferrying wounded people from the airport, the witness said.

Turkey has suffered a spate of bombings this year, including two suicide attacks in tourist areas of

Istanbul blamed on Islamic State, and two car bombings in the capital, Ankara, which were claimed by a Kurdish militant group.

In the most recent attack, a car bomb ripped through a police bus in central Istanbul during the morning rush hour, killing 11 people and wounding 36 near the main tourist district, a major university and the mayor’s office.

Turkey, which is part of the U.S.-led coalition against Islamic State, is also fighting Kurdish militants in its largely Kurdish southeast.