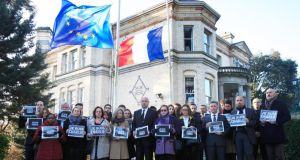 The Ambassador of France to Ireland Jean-Pierre Thébault and staff from the French Embassy hold a minute’s silence at the French Residence on Ailesbury Road, Dublin for those killed in the attack at the Paris offices of French satirical weekly magazine Charlie Hebdo. Photograph: Gareth Chaney/Collins

The French tricolour flew at half-mast as staff members from the French Embassy in Dublin gathered to pay their respects to those who lost their lives in Wednesday’s attack on the Paris office of satirical magazine Charlie Hebdo.

Holding a sign which read “Je suis Charlie” (“I am Charlie”), French ambassador Jean-Pierre Thébault joined his colleagues in a minute’s silence to mark not only the journalists and police officers who died in the attack, but also in support of the fundamental values of freedom of speech.

“The French people are all united in standing for liberty, equality and fraternity,” said Mr Thébault. “The message of the people is clear; don’t feel threatened.”

“They will win if they feel they have succeeded in making us fear. As a country let’s be bold, let’s continue relentlessly to testify that we have core values.”

Mr Thébault thanked the Irish people for their “outstanding” support since the attack.

“I want to stress the quality and the intensity of the solidarity by the Irish people, by the Irish Government,” he said.

“I think it’s a testimony in support, not only of those journalists, but in support of all journalists in general.”

Tánaiste Joan Burton, who visited the embassy to sign the book of condolences, said the attack had struck the principles of liberty, equality and fraternity upheld both by France and by the European Union.

“The freedom of the press and the operation of a free press is the cornerstone of all our liberty and of all our democracies and our democratic institutions,” said Ms Burton.

“It’s very important that at times like this, which are exceptionally difficult, that we would hold those values, restate them and ensure that they can be practised without fear.”

The Tánaiste said she was “shocked” by the young ages of the suspects in the Charlie Hebdo attack, remarking that those killed in cold-blood were older journalists who had “come through many decades and generations of journalism.”

“They were without pity, the assassins acted as cold-blooded executioners, there was obviously no trial.

“Democratic institutions have to show resilience and strength and I’m very sure that that’s what will happen in France.”

Members of the Al-Mustafa Islamic Cultural Centre of Ireland have also condemned the attack, calling it an assault not only on France, but also on Islam.

“Free speech is not a western concept: it is a universal craving of the human soul,” said the statement from the Al-Mustafa centre.

“Unfortunately there is a problem of extremism and radicalisation among a minority of Muslim Youth in Western countries.

“It is the responsibility of Islamic leaders to highlight the peaceful and just message of Islam in which there is no space for extremism.”

Members of the public are invited to visit the French embassy on Ailesbury Road, Ballsbridge, Dublin 4, to sign the book of condolences from 10am to 5pm on Thursday and Friday.

There will be a second book of condolences open in the Alliance Française in Limerick on Friday.

Messages can also be sent to jesuischarlieIreland@gmail.com or people can tweet at @FranceinIreland.