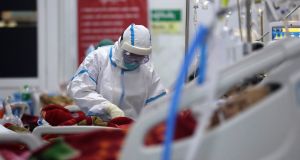 Pakistan’s planning minister says the country’s drug regulatory authority has approved the use of Oxford-AstraZeneca’s Covid-19 vaccine and the government is trying to make it available by the first quarter of the year.

Asad Umar, who is also the head of the national agency for Covid-19, told Geo TV that the vaccine in the first phase will be administered to health workers and those aged 65 and above.

Mr Umar said the Chinese company CanSino is also holding clinical trials in Pakistan and hoped its vaccine would also be registered next month.

He said Pakistan will get the vaccines through the Global Alliance for Vaccines and Immunisation, or Gavi, and other alternative international sources.

The AstraZeneca vaccine is being prepared in India, which has strained relations with rival Pakistan and says it will prioritise its own population.

Meanwhile, coronavirus was found on ice cream produced in eastern China, prompting a recall of cartons from the same batch, according to the government.

The Daqiaodao Food Co in Tianjin, adjacent to Beijing, was sealed and its employees were being tested for Covid-19, a city government statement said.

There was no indication anyone had contracted the virus from the ice cream.

Most of the 29,000 cartons in the batch had yet to be sold, the government said.

It said 390 sold in Tianjin were being tracked down and authorities elsewhere were notified of sales to their areas.

The Chinese government has suggested the disease, first detected in the central city of Wuhan in late 2019, came from abroad and has highlighted what it says are discoveries of the coronavirus on imported fish and other food, though foreign scientists are sceptical.

Worries simmered in mainland China about a potential fresh wave of coronavirus cases ahead of the Lunar New Year next month as authorities on Sunday reported 109 new Covid-19 cases, most of them in Hebei province surrounding Beijing. Though the January 16th tally of new cases was less than the previous day’s 130, China has in the past week seen the number of daily cases jump to an over 10-month high.

Scattered shortages of Covid-19 vaccines persisted on Saturday under pressure from growing demand, as previously inoculated Americans returned for their required second shots and millions of newly eligible people scrambled to get their first. The supply gaps, coming as the US vaccination effort enters its second month, prompted some healthcare systems to suspend appointments for first-time vaccine seekers and one New York healthcare system to cancel a slew of existing ones.

US president-elect Joe Biden on Friday said he would order increased production of syringes and other supplies to ramp up vaccinations against Covid-19 and improve upon the Trump administration rollout that he called a “dismal failure.” Under Mr Biden’s plan, federal disaster-relief workers would set up thousands of vaccination centres, where retired doctors would administer shots to teachers, grocery store workers, people over 65 years old and other groups who do not currently qualify.

Moderna will deliver 7.5 million doses of Covid-19 vaccine to Switzerland in batches in the months ahead, putting the country among the world leaders in inoculating its population, the head of Moderna’s European business said. “We are working at full speed to steadily expand our production capacities. If everything goes as planned, just under half the population could be treated with our vaccine by the summer,” Dan Staner told the Sonntags Blick newspaper in an interview.

German pharmaceutical giant Bayer is examining whether it can help CureVac to produce its experimental Covid-19 vaccine, its chief executive was quoted as saying on Sunday. Though inoculation campaigns have started around the world using various Covid-19 vaccines, many countries say their ability to get shots into arms is being limited by lower than expected supplies owing to a shortage of production.

Britain’s government hopes to ease some lockdown restrictions in March as it presses ahead with Europe’s fastest rollout of Covid-19 vaccines, foreign minister Dominic Raab said on Sunday. The country, which also has Europe’s highest Covid-19 death toll, has been under national lockdown since January 5th, with schools closed for most pupils, non-essential businesses shut and people ordered to work from home where possible.

India’s Covid-19 vaccination drive hit a bump on the first day due to glitches in an app called Co-Win that is being used to coordinate the campaign, according to several officials involved in the immunisation programme. Prime minister Narendra Modi launched what his government has described as the “world’s largest vaccination programme” on Saturday to rein in the pandemic in India, which has reported the second highest number of cases after the United States.

Brazil’s health regulator is seeking further data on Russia’s Sputnik V coronavirus vaccine before considering its approval for emergency use. Documents supporting drugmaker Uniao Quimica’s application for emergency use of the vaccine have been returned to the company because they did not meet its minimum criteria, the watchdog said on Saturday.

Lebanon’s caretaker health minister signed a final deal on Sunday to secure 2.1 million doses of Pfizer-BioNTech’s Covid-19 vaccine as the country battles a steep rise in infections. The vaccines are expected to arrive in batches starting February, the ministry said in a statement.

The second batch of Russia’s Sputnik V coronavirus vaccine arrived in Argentina on Saturday, allowing the South American country to apply the second part of the two-dose program aimed at inoculating front-line health workers. Some 300,000 doses of the vaccine arrived from Moscow on a special flight of flag carrier Aerolineas Argentinas.