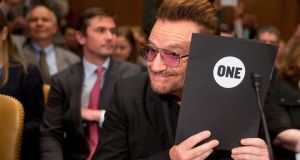 Bono prepares to testify on Capitol Hill in Washington. He said the refugee crisis in Europe ‘has moved from practical to existential. Photograph: Andrew Harnik/AP

U2 frontman Bono has said the refugee crisis threatens the “integration of Europe”.

The singer spoke to the US Senate’s State and Foreign Operations Subcommittee on the causes and consequences of violent extremism on Tuesday.

He was speaking after a recent trip to refugee camps in Kenya, Jordan and Turkey .

“The two fictions the expedition revealed are, number one, that this refugee problem is temporary. The typical crisis that creates refugees lasts 25 years. On our trip, Senator Graham and I heard the term “permanent temporary solution” thrown around, but without the irony that the phrase requires,” he said.

“The second fiction is that it is simply a Middle Eastern problem. Refugees are flowing from all over the world—especially Africa. Of the top ten countries that are hosting refugees today, five of them are African,” he said.

“Aid in 2016 is not charity; it is national security and when it is structured properly with a hard focus on fighting corruption and prudent governance to qualify for that aid it could be the beat bulwark we have against violent extremism that is gaining traction,” he said.

Bono said the refugee crisis in Europe “ has moved from practical to existential.”

“In 1989 the wall that divided Europe came down, a remarkable moment to live through. Who could imagine in 2016 another set of walls are being built up, this time made of mesh and razor wire but walls nonetheless,” he said.

“Members of the Subcommittee, let me soberly suggest to you that the integration of Europe, the very idea of European unity is at risk here.”

“Put simply, as we Europeans have learned, if the Middle East catches fire, the flames jump any border controls. And if Africa fails, Europe cannot succeed,” he said.

He said by 2050, the African population will have doubled to 2.5 billion, twice that of China and that 40 percent of the world’s youth will be African.

“ Of the ONE Campaign’s seven million members, three million of them are in Africa; we have a sense of their potential as an engine of growth, one that roars, but we also fear that if the young people of Africa are misled and marginalised, their anger could be channelled not to hope, but to hate,” he said.

Bono was also critical of the international communities response to the refugee crisis.

“The international community although it means well, is having a lot of meeting about the crisis and I believe it is issuing a record amount of press releases but what it is no doing is cutting cheques,” he said.

He said as of last month, the UN’s humanitarian response plan for 2016 had only received nine per cent of the funding they require.

“Grants are handed out annually on a hand to mouth basis with no predictability which makes it impossible to plan which is madness. It is absolute madness,” he said.

Bono also called for funding to be prioritised for the support of countries along the Sahel and the Levant who are not yet in crisis.

“I know this sounds counterintuitive, but the people I met—especially the military—told us it is critical that these countries not only survive but that they thrive. Imagine if the chaos that ripped through Syria were to engulf Egypt or, God forbid, Nigeria. These are giant countries,” he said.