Rodrigo Duterte is reaching out to China, a former rival of the Philippines 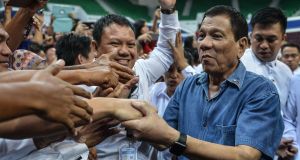 President Rodrigo Duterte: China looks set to benefit from his anger at the US for its refusal to back his war on drugs, in which there has been an estimated 3,000 deaths linked to vigilante groups and police actions. Photograph: Dean K/AFP/Getty Images

Registration for firms wishing to accompany Philippines president Rodrigo Duterte’s on his first state visit to China is oversubscribed, with at least 400 businesspeople packing their suitcases for the trip.

Trade is the primary focus of the mission, which runs from Tuesday to Friday. It also marks the most potent symbol yet that, under Duterte, the Philippines is shifting its affections away from its traditional ally Washington towards what has for several years been its bitterest regional rival, China.

The Beijing government has been wooing the support of the Philippines for its territorial ambitions in the South China Sea, after Duterte’s predecessor, Benigno Aquino III, successfully brought a case to an international maritime tribunal in The Hague that censured China.

Now it looks like China will benefit from Duterte’s anger at the US for its refusal to back his war on drugs, which has seen an estimated 3,000 deaths linked to vigilante groups and police actions.

President Barack Obama called on Duterte to stop the killings, prompting the famously foul-mouthed Duterte to call him a “son of a bitch” and tell Washington to “go to hell”.

China has made no comment on the war on drugs; instead Beijing has discreetly sponsored a 1,000-bed rehab centre.

Prof Patricio Abinales from the school of Pacific and Asian studies at the University of Hawaii-Manoa told The Irish Times he does not expect sovereignty to be on the agenda in talks with Chinese leaders.

“Duterte will not formally roll back The Hague ruling but come to an informal agreement with China to just set this aside and concentrate on the business side of the relationship,” said Abinales, a former Woodrow Wilson Centre scholar who grew up on Duterte’s home island of Mindanao. “Duterte and the Filipino business group will highlight potential investments coming in, which I am sure the Chinese will promise, and probably announce with pride Chinese commitment to help build more drug addict rehabilitation homes, as well as the high-speed train that will connect the international airport, which is far from Manila.”

It’s not always easy to understand why Duterte seems to resent the US so much. Certainly he is a patriot who resents US colonial rule of the Philippines from 1898 to 1946 and he is angry at the lack of support for his war on drugs, which he feels is a justified struggle to stop the Philippines turning into a narco-state like Colombia.

Abinales said there is another reason, which harks back to a bombing at a Davao hotel in 2002, when Duterte was mayor. American self-described treasure hunter Michael Meiring accidentally blew up a homemade bomb at a hotel, injuring himself. US FBI operatives whisked Meiring away without telling local law enforcement.

When Duterte denied the US use of Davao for drone operations in 2013, he said it was because of the incident. “China is interested in exploring the space possibly made vacant by the deteriorating relations with the US,” said an EU diplomatic source based in Manila.

The big issue analysts is whether there is some long-term strategy behind Duterte’s actions. “If there is a strategy, his administration seems not to have been informed,” said the EU diplomat. “We also can’t see the logic. As far as we are concerned, it is perfectly alright for Duterte to aim for improved relations with China, but it does not need to come at the cost of worse relations with the US and the West.”