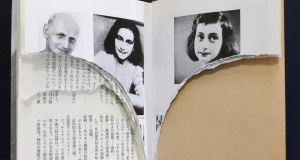 Ripped pages of Anne Frank’s ‘Diary of a Young Girl’ at a library in Tokyo. Pages of the book have been methodically ripped out of dozens of libaries in the Japanese capital. Photograph: Kyodo/Reuters

Vandalism is rare in Tokyo, anti-Semitism rarer still. So why would someone make their way across this sprawling city to dozens of libraries and methodically rip pages out of Anne Frank’s diary, one of the most iconographic texts of the Jewish Holocaust?

Police have this week identified at least 38 libraries targeted in the city limits alone. The books include not just Diary of a Young Girl, written by the Jewish teenager while she hid from the Nazis in an Amsterdam attic during the second World War, but other Holocaust-related texts.

Jewish groups have expressed concern but avoided speculating on the culprits. “It was an ideologically driven campaign,” says Rabbi Abraham Cooper, of the Simon Wiesenthal Centre in Los Angeles. “Some people must have done their homework. Beyond that, it’s wrong to speculate.”

Suspicion, however, has fallen on ultra-right-wing groups. Always a fringe presence in Tokyo, in the last few years right-wingers have descended on the city’s Korea-town with placards and megaphones, threatening to kill the residents and build gas chambers where their shops and businesses now stand.

The abuse has shocked most Tokyoites. Japan does not have serious race problems, partly because it has so few foreigners – less than 2 per cent of the population. Still, some analysts believe ultra-nationalists have been emboldened by Japan’s recent slide to the right.


Concentration camp
The diary chronicles Anne Frank’s life from her 13th birthday in June 1942 until her death from typhus in a Nazi concentration camp in March 1945. A global bestseller, it was added to the Unesco world heritage list in 2009.

By coincidence, Japan applied to Unesco last month to register 300 suicide letters from kamikaze pilots, ahead of the war’s 70th anniversary next year. The application, by a country that fought on the same side as the Nazis, triggered fury in China and South Korea, Japan’s wartime victims.

Anne Frank’s diary became an instant hit in Japan when it was translated in the early 1950s. It is still one of the most popular foreign language books ever published here and has been made into several comic books and even a full-length animated movie. For many Japanese it is a symbol of innocence defiled and victimhood.

“I’ve rarely met a Japanese who hasn’t read it,” says long-time Tokyo resident Roger Pulvers, who wrote the script for the movie. He says the Holocaust is the context for the story but does not explain its popularity. “It’s a coming-of-age story of a shy, young girl who is closed up inside with her family and who falls in love. That’s universal.”

The book’s status might have made it an irresistible target for a single disturbed individual – or group. Its high profile means the police have taken the campaign seriously, setting up a special task force to find those responsible. So far they appear undeterred: most libraries have moved the books out of public sight, so the vandals have this week started targeting book stores.

Ordinary Japanese have responded by sending their own copies to public libraries. One unintended consequence of the vandalism is the revival of interest in one of Japan’s unsung Holocaust heroes – Chiune Sugihara, a diplomat who saved 6,000 Jews by issuing them visas in war-time Lithuania.

This week, two large boxes containing 137 copies of the Anne Frank book arrived at the Tokyo Metropolitan Central Library. The anonymous Japanese donor left a note asking that the books be distributed to the libraries that had suffered losses.

The note was signed “Chiune Sugihara”.