Strategic city in the north captured by insurgents 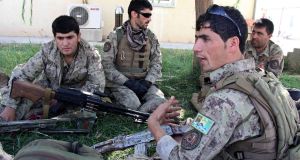 Afghan security personnel talk as they perpare to launch a counter-offensive to retake the city from Taliban insurgents at the airport in Kunduz on September 30, 2015. Photograph: Nasir Waqif/AFP/Getty Images

The Taliban are widening their offensive in northern Afghanistan after government forces failed to take back Kunduz, the strategic city in the north, which on Monday was captured by insurgents. It is the largest Afghan city to fall to the Taliban in the 14-year war.

Despite claims from Afghan authorities that an airstrike had killed a prominent Taliban leader and more than 100 insurgents, it appears the militants have dug in around the city.

According to local people, Taliban fighters are still walking the streets freely, assuring people they do not intend to harm civilians in an apparent attempt to win local support.

“They don’t punish [ordinary] people,” said Waqif, a local reporter who was still in city, despite a mass displacement of families. “For the time being, they are not threatening.” He said that while the Taliban had initially told people not to leave their houses, some shops had reopened yesterday morning.

Backed by at least two US airstrikes, the Afghan army has sent support from neighbouring Baghlan and Kabul provinces, but Taliban ambushes and roadside bombs have impeded swift movement of troops and interrupted supply routes, including for medical stocks.

About 5,000 Afghan troops have congregated around the airport, according to a security official speaking to Reuters. But they barely make up for the large number of troops who fled the city when the Taliban invaded. According to local officials, morale remained low.

“We still have enough forces to take on the Taliban but sadly there is no will or resolve to fight,” Mohammad Zahir Niazi, chief of Chardara district, told Reuters. After a full day of fighting, the militants were digging in and still controlled most of the city, despite early government claims that they were being pushed back.

The Taliban were encircling the airport until 3am yesterday, according to another reporter who spent the night there. If taken, the airport would help the militants choke off the city.

Afghan intelligence service NDS claimed a “precision airstrike” had killed Mawlawi Abdul Salam, the Taliban’s shadow governor in Kunduz, along with a local representative of the Pakistan-based militant group Lashkar-e-Taiba and a dozen other insurgents.

The US military confirmed it had “conducted an airstrike in the vicinity of the Kunduz airport at approximately 11.30pm local time, September 29th, against individuals threatening the force”, spokesman Col Brian Tribus said. He did not confirm Salam had been killed.

Meanwhile, Kunduz’s civilians are suffering. The local Médecins Sans Frontières hospital was working over capacity, with more than 130 injured patients, while the public hospitals had admitted almost 200 wounded, including 28 women, according to spokesman Wahidullah Mayar. The UN estimated at least 100 civilians had been killed in the fighting, and that up to 6,000 civilians had fled.

“I am deeply concerned about the situation in Kunduz following the Taliban’s attack on the city,” said Nicholas Haysom, the UN chief in Afghanistan. “The reports of extrajudicial executions, including of healthcare workers, abductions, denial of medical care and restrictions on movement out of the city are particularly disturbing.” A resident, who asked to remain anonymous, said: “My house is burned, the town of Kunduz has been destroyed by the Taliban. Our poor people in Kunduz have been displaced, killed and wounded. Expensive shops have been looted by Taliban.”

The fall of Kunduz is a great propaganda victory for the Taliban. A military win can help consolidate support for the new leader, Mullah Akhtar Mansour, at a time when the movement is plagued by rifts after the announcement of the death of its founder, Mullah Omar.

The biggest territorial win since 2001, Kunduz is also symbolically important, as it was the first city to fall after Russia’s retreat in the 1980s. It was also the last major city taken by the US-backed Northern Alliance, which toppled the Taliban government in 2001.

The troubles in Kunduz are likely to reignite discussion about prolonging US engagement in Afghanistan. Barack Obama is aiming for a withdrawal to a troop size small enough to be housed at the US embassy in Kabul by the end of next year. – (Guardian service)