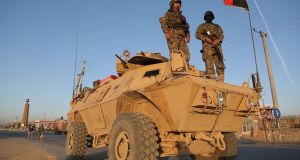 The Taliban announced the start of their spring offensive on Tuesday, pledging to drive Afghanistan’s Western-backed government from power.

The announcement of the formal start of “Operation Omari”, named after the late Taliban founder Mullah Mohammad Omar, comes just days after US secretary of state John Kerry visited Kabul and reaffirmed US support for the national unity government led by President Ashraf Ghani.

“Jihad against the aggressive and usurping infidel army is a holy obligation upon our necks and our only recourse for reestablishing an Islamic system and regaining our independence,” the Taliban said in a statement.

The insurgency has gained in strength since the withdrawal of international troops from combat at the end of 2014 and the Taliban are stronger than at any point since they were driven from power by US-backed forces in 2001.

As well as suicide and tactical attacks, the operation would include assassinations of enemy commanders in urban centres, the Taliban statement said.

“The present operation will also employ all means at our disposal to bog the enemy down in a war of attrition that lowers the morale of the foreign invaders and their internal armed militias,” it said.

In line with recent statements, it also said it would establish good governance in areas it controlled as well as avoiding civilian casualties and damage to infrastructure.

How far the announcement will lead to an immediate escalation in fighting, which caused 11,000 civilian casualties last year, remains unclear. However, Nato and Afghan officials have said they expect very tough combat in 2016.

Heavy fighting has continued for months across Afghanistan, from Kunduz, the northern city that fell briefly to the insurgents last year, to Helmand province bordering Pakistan in the south.

In Helmand, where thousands of British and American troops were killed or injured fighting the Taliban, government forces have pulled back from many areas and are struggling to hold on to centres close to the provincial capital, Lashkar Gah.

According to Nato commanders, the Taliban exerts control over only six percent of Afghanistan but up to a third of the country is at risk from the insurgents and government forces control no more than 70 per cent of the country’s territory.

Unless the plan is changed, the reduction would mean the end of most of Nato’s training and assistance operation, leaving the remaining US troops focusing on counterterrorism operations against radical groups like Islamic State.