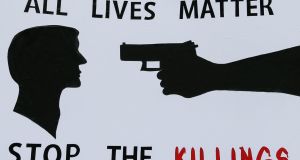 A Filipino student holds a placard during a protest against drug related killings in Manila, Philippines. Photograph: Mark R Cristino/EPA

Philippines President Rodrigo Duterte has likened himself to German Nazi leader Adolf Hitler, saying he would “be happy” to exterminate three million drug users and dealers in the country.

His war on narcotics has already led to the extrajudicial killing of thousands of people allegedly linked to the drugs trade. At the same time, he attacked the EU and the United Nations for portraying him as “Hitler’s cousin”.

“Hitler massacred three million Jews. Now there are three million drug addicts … I’d be happy to slaughter them,” Mr Duterte said in his home base of Davao City on his return from a two-day official visit to Vietnam.

“At least if Germany had Hitler, the Philippines would have, you know …” and pointed to himself. He went on to say that he wished he could make all criminals his victims to “save the next generation from perdition”.

Mr Duterte swept to power on a populist platform with a pledge to end drug abuse and corruption in the Philippines. Since his inauguration on June 30th, some 3,509 people have been killed.

Of these, 2,233 were killed by vigilantes apparently working on police tip-offs, while 1,276 of the total are believed to have been killed in police actions or by officers acting in “self-defence”. Victims’ bodies are found with signs claiming “dealer”.

Mr Duterte said verbal attacks on himself had not mattered when he was merely mayor of Davao, but as president of the Philippines, it was a different matter.

“When I am the President and the tirades get bitter and stupid, you put all the Filipinos, especially outside, you put them to shame,” he said.

Mr Duterte went on to decry the European Union and the United Nations for depicting him as being similar to Hitler.

“You’re portrayed or pictured to be some - a cousin of Hitler. And you do not even bother to find out, to investigate. Imagine that, I will be facing... even the international court for genocide,” he said.

Mr Duterte has been fiercely defensive of his war on drugs, insulting US President Barack Obama, the European Union and the United Nations for criticising his approach in recent weeks.

He attacked the EU for its policy on refugees, accusing the bloc of hypocrisy.

His predecessor, President Benigno Aquino, warned during the election campaign that Mr Duterte’s demagoguery was similar to the tactics employed by Hitler during his rise to power in the 1920s and 1930s.

As well as attacking his overseas critics, one of his biggest domestic critics, Senator Leila de Lima, has accused Mr Duterte of launching a “personal vendetta” against her for her opposition to his campaign on drugs.

“It’s been hell,” she said. Ms de Lima, as chair of the Senate committee on justice and human rights, started an inquiry into the killings. She has since been ousted from her position by Mr Duterte’s allies in the Senate and a number of felons have been brought in to testify against her.

She has been warned to leave the country but said she would stay because her “father did not raise a coward”.