Philippines hit as much by unfair debt as typhoon 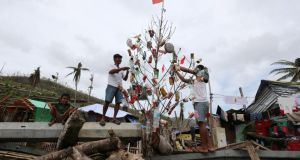 Filipino farmers Leobeneldo Gacita and his son-in-law Arcenio Estosane arrange a Christmas tree made of trash from relief goods in the typhoon devastated village of Pinamitian, in the eastern Samar province of the Philippines. Photograph: Dennis M Sabangan/EPA

By today, the Philippines will have spent $1 billion paying foreign debts in the seven weeks since typhoon Haiyan devastated much of the country. It will have spent a total of $8.4 billion on foreign debt in 2013, and faces a further $8.8 billion in 2014. While a little more than $100 million has been pledged by international donors for relief work, more than 800 times that amount of money leaves the country every year to pay debts.

The people of the Philippines have been saddled with a large debt since the 1980s, when Ferdinand Marcos, the dictator who held the presidency from 1965 to 1986, was loaned large amounts by western governments and institutions such as the World Bank in order to keep him onside during the cold war. During his rule, Marcos is thought to have stolen up to $10 billion of Filipino money. But after he was deposed in 1986, the lenders who were complicit in this corruption continued to demand repayment.

The impact of chronic debt has been devastating for the Filipino people, with public services such as health and education persistently underfunded. Today, about 16 million Filipinos are estimated to be living in extreme poverty and malnourished. Meanwhile, more than 20 per cent of government revenue is spent on foreign debt payments each year, almost as much as on health and education combined.

Typhoon Haiyan
In response to Typhoon Haiyan, the World Bank and Asian Development Bank rapidly announced they would lend $1.9 billion for emergency assistance and reconstruction. That this much-needed money will be given as loans rather than grants means the impact of the disaster will continue through another generation because of the high debt payments.

By definition, loans for reconstruction cannot generate returns to enable the debt to be paid. The most they can do is return infrastructure to the state it was in before a disaster hit. As Joseph Stead from Christian Aid says: “Debts that should have been cancelled years ago are limiting the capacity of the Philippines to respond and rebuild [after] the typhoon. Action on this is clearly needed before any new debts are added.”

But the impact of high debt payments is not the only reason Filipino debt should be cancelled. Following the end of Marcos’s dictatorship, many of those who had resisted his rule formed the Freedom from Debt Coalition, calling for the non-payment of his odious debts. Loans to Marcos to build the Batan nuclear power plant – which never generated any electricity, and was built on an earthquake faultline – merely represent the most absurd example.

These loans continued after the fall of Marcos. In 1997, the Bank of Austria lent money for medical waste incinerators, which were already being decommissioned in Europe because of their high level of pollution and would be banned in the Philippines within two years. In 2008, the Freedom from Debt Coalition got the Philippines Congress to agree to suspend payments on these and 10 other loans, but this decision was vetoed by Gloria Arroyo, the president at the time.

Debt relief
The Philippines was excluded from international debt relief schemes because, with an annual income of £1,600 a person, it was adjudged “too rich” by governments. Consequently, the country remains trapped in a debt cycle where payments limit government investments, preventing repayment of the debt. Over the past 40 years, the Philippines government has been loaned $115 billion and has repaid $132 billion in principal sums and interest. However, it is still said to owe $60 billion.

This cycle is now being exacerbated by climate change, as the strength of typhoons and the damage they cause increases. Richer governments have consistently refused to meet obligations, agreed in 1992, to compensate developing countries for the damaging impact of their greenhouse gas emissions.

‘Too rich’
Even where limited funds are being given, these often come in the form of loans. For example, alongside a grant of £70 million, the UK government is lending £255 million through the World Bank for climate change adaptation projects. This includes lending money to the Caribbean island of Grenada, even though it is already in default and unable to pay its huge debts.

“Justice for the Filipino people demands debt cancellation,” says Ricardo Reyes of the Freedom from Debt Coalition. “Climate justice demands reparations to enable the Philippines to develop resilience to climate change and compensation for losses and damages.”

Where debts are out of control, fail to protect basic human rights, or come from odious loans for damaging or failed projects – all of which is true of the Philippines – they should be cancelled. As climate change gets worse, the largest contributors to greenhouse gas emissions have a moral duty to compensate those who are most impacted, and to do so with grants, not loans. – (Guardian service)