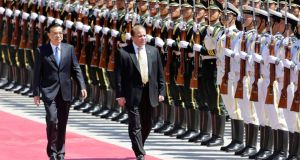 Pakistan’s prime minister Nawaz Sharif (right) inspects the guard of honour with Chinese premier Li Keqiang during a welcome ceremony outside the Great Hall of the People in Beijing, today. Mr Sharif’s government has been criticised for re-introducing the death penalty. Photograph: Jason Lee/Reuters

Pakistan’s new government, striving to appear determined to rein in escalating crime and militancy, has ended a ban on the death penalty, in a move condemned as “shocking and retrograde” by rights group Amnesty International.

Such a reinstatement of capital punishment is rare, with about 150 countries having already either abolished the death penalty or stopped administering it.

A 2008 moratorium imposed by Pakistan’s previous government, praised at the time by global rights groups, expired on June 30th.

“The present government does not plan to extend it,” said Omar Hamid Khan, an interior ministry spokesman.

Mr Khan said the new policy of prime minister Nawaz Sharif’s government was to execute all death row prisoners, except those pardoned on humanitarian grounds. Pakistan’s president must approve all executions.

Pakistan is among the last nations in the world to stick to the practice, alongside the United States, China, Nigeria, Yemen and some others.

Up to 8,000 people remain on death row in dozens of the country’s notoriously overcrowded and violent jails, according to London-based Amnesty. The government has put the number at about 400. The method of execution is usually hanging.

“As long as the death penalty is in place, the risk of executing innocent people can never be eliminated,” Amnesty said in a statement this week in response to rumours ahead of the decision.

“The systemic fair trials violations in Pakistan not only exacerbate this risk, but also put Pakistan in breach of its international obligations.”

Pakistan says capital punishment is key to deterring crime in places such as Karachi, a major city of 18 million plagued by violence, as well as in the areas on its border with Afghanistan where Taliban militants launch daily attacks.

Papua New Guinea, one of the world’s poorest and most corrupt countries, reinstated the death penalty in May and repealed its sorcery laws after a string of gruesome “witch” killings and gang-rapes.

Asked about Amnesty’s criticism, Mr Khan pointed to the fact that capital punishment was still in use in parts of the United States, a nation he said was home to the “best judicial system”.

Mr Khan said, “We have a credible judicial system in place and the law must be allowed to take its course,” adding that up to 12 cases were being referred to the president every day.

Pakistan’s moratorium drew wide praise because of concerns that its courts and police were too inept to ensure the accused a fair trial. But Pakistan did, however, break its own rules in 2012, when it executed a convicted murderer and a former army serviceman.

The previous government of the Pakistan’s Peoples Party, whose former chairman, Benazir Bhutto, was a fierce opponent of capital punishment, enforced the moratorium soon after taking power in 2008 under president Asif Ali Zardari.

Mr Zardari, the widower of Bhutto, who was assassinated in 2007, is due to step down later this year.