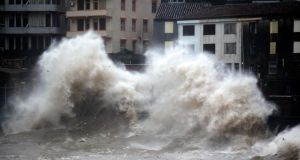 Nearly one million people have been forced to flee as Typhoon Chan-hom hit the Chinese coast south of Shanghai with winds of up to 160km/h.

The storm made landfall in Zhoushan, a city just east of the port of Ningbo in Zhejiang province. There was no word of injuries, but the broadcaster showed its reporter standing in knee-deep water in a flooded street.

More than 960,000 people were evacuated from coastal areas ahead of the storm, while the provincial flood control bureau said 28,764 ships had been ordered back to port by late Friday.

The national weather service said earlier the typhoon might be the strongest to strike China since the communist government took power in 1949. It was initially deemed a super-typhoon but was downgraded on Saturday to a strong typhoon.

The country’s railway service said more than 100 trains between the region’s cities were cancelled until Sunday.

Flights into and out of Zhoushan were cancelled and bus services and speedboat ferry services halted. Elsewhere in Zhejiang, 388 flights were cancelled in Hangzhou, 143 in Ningbo and 37 in Wenzhou, according to reports.

The storm dumped rain on the northern Philippines and Taiwan, where several flights were suspended. The stock market and public offices were closed on Friday in Taipei, Taiwan’s capital.

Typhoons are common at this time of year in the South China Sea, picking up strength from the warm waters before dissipating over land.

Chan-hom is the second major storm to hit China this week, after Typhoon Linfa forced 56,000 people from their homes in the southern province of Guangdong.