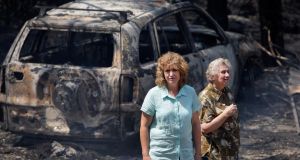 Firefighters battling some of the most destructive wildfires ever to strike Australia’s most populous state were bracing today for worsening conditions. Higher temperatures and winds were expected to intensify the danger in the coming days.

The fires had destroyed a total of 208 homes and damaged another 122, the service said as assessment teams continued to update the tally in their search for survivors and victims.

The decision was taken after Rural Fire Service Commissioner Shane Fitzsimmons wrote to Mr O’Farrell requesting he declare a state of emergency, according to a government statement.

“The RFS Commissioner has advised weather conditions over the next few days will deteriorate significantly and that there is potential for a significant and widespread danger to life and property across the State,” Mr O’Farrell said in the statement.

“This is not an action taken lightly by either the commissioner, the minister or myself, but it’s important the Rural Fire Service and other emergency services have the powers and the resources they need to combat this threat,” he added.

In the Blue Mountains west of Sydney, one of the worst-hit regions in fire-ravaged New South Wales state, 193 homes have been destroyed and another 109 damaged by the fire storm that peaked on Thursday, the Rural Fire Service said.

A Blue Mountains hospital was evacuated yesterday because of the wildfire threat. The 24 patients were transported to a Sydney hospital where they are expected to stay until Wednesday at least, Health Department official Clair Ramsden said.

With 68 fires still burning — 22 of them out of control — and dangerous weather conditions forecast until Thursday, authorities were expecting the worst. “I’m increasingly concerned about the potential for significant fire runs and consequential damage if the weather conditions materialise like they’re indicating they could over this week,” Rural Fire Service Commissioner Shane Fitzsimmons said.

A 63-year-old man died of a heart attack on Thursday while protecting his home from fire at Lake Munmorah, north of Sydney, and at least five people — including three firefighters — have been treated in hospitals for burns and smoke inhalation, officials said.

Police have charged two girls aged 12 and 13 with lighting a fire in a woodland on Sydney’s western fringe on Friday. Firefighters were able to extinguish the small blaze without damage to property. The girls will appear in a juvenile court on December 4, police said.

It was not immediately clear what penalty they could face if convicted. Arson investigators are examining the origins of several of more than 100 fires that have threatened towns surrounding Sydney in recent days.

The wildfires have been extraordinarily intense and extraordinarily early in an annual fire season that peaks during the southern hemisphere summer, which begins in December.

Around 1,500 firefighters have been back burning to contain blazes since winds and temperatures became milder on Friday. Several roads in fire-affected areas north, west and south of Sydney have been closed.

Wildfires are common in Australia, though they do not tend to happen in large numbers until the summer. This year’s unusually dry winter and hotter than average spring have led to perfect fire conditions.

In February 2009, wildfires killed 173 people and destroyed more than 2,000 homes in Victoria state.