Conservatives have long disliked 1947 constitution, in which Japanese people ‘forever renounce war as a sovereign right’ 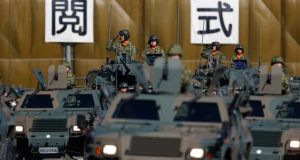 Members of Japan’s Self-Defence Forces’ infantry unit during the annual troop review ceremony at Asaka Base in Asaka, near Tokyo. Photograph: Issei Kato/Reuters

For a document drawn up during a few frantic days of 1946 in bombed-out Tokyo, Japan’s constitution has stood the test of time.

Written during the American occupation, as hundreds of thousands of starving, war-displaced citizens wandered the capital, the document has stayed largely untouched since. And that, for prime minister Shinzo Abe, is the problem.

Conservatives have long disliked the May 1947 constitution, which enshrines western-style rights in Japan and ended the emperor’s god-like status, making him a “symbol of the state”.

In particular, article 9, in which Japanese people “forever renounce war as a sovereign right” and “the threat or use of force as means of settling international disputes” rankles with Abe’s supporters.

Debates about the constitution have grown more heated with the rise of China. In a critical review this year, Japan’s government, led by the conservative Liberal Democrats (LDP), said China’s military budget had mushroomed 30 times in the last decade. In contrast, Japan’s military spending has been pretty flat for 20 years.

China replies that despite its pacifist constitution, Japan maintains one of the world’s largest, most sophisticated militaries, and shelters under the US nuclear umbrella, thanks to its half-century alliance with Washington. In contrast, says Beijing, its military forces are still vastly inferior. Analysts say China’s military buildup is partly a response to the fear of encirclement by the US and its allies.

Forging ahead
Nevertheless, Japan’s government is forging ahead with the most profound challenge to the constitution since 1947.

The government argues that Japan should be permitted to engage in what it calls “collective defence,” meaning it can fight with a military ally (the US) if it comes under attack from an enemy (China, though this is never explicitly stated). Until now, legal experts have interpreted the constitution as allowing Japan’s military to open fire only if fired upon.

During his first term as prime minister in 2006-7, Abe tried to pull Japan away from its pacifist stance by directly challenging article 9. But the legal hurdles were too high: constitutional change requires a two-thirds parliamentary majority in both houses and a public referendum. So this time he is moving toward “reinterpreting” the article to allow collective defence.

The attempt has produced sometimes comical exchanges with the LDP’s avowedly pacifist coalition partner New Komeito, which is backed by millions of Buddhists. New Komeito has repeatedly said it sees no need to change how the constitution is interpreted. But in the last week, its members have signalled to the media that such is the prime minister’s zeal, the party may have to sign up to end the ban on collective defence or jump ship.

Many ordinary Japanese support article 9, which they credit with keeping the country out of wars for nearly 70 years. An opinion poll this month in the liberal-left Asahi newspaper found 63 per cent of respondents oppose Abe’s plans.

Last month, Nobel Prize winning author Kanzaburo Oe said Japan faced its most dangerous moment since 1945. “Exercising the right to collective self-defence means fighting wars together with the United States, ” he told a demonstration of 4,000 people.

Abe looks undeterred, however, by this criticism from one of the elderly icons of Japan’s declining pacifist left. He senses many younger Japanese are more receptive to the conservative argument – that Japan has shown great reserve in the face of a string of what it calls “provocations” by its powerful neighbour.

Nor has the prime minister been deflected by opinion polls. On April 1st, he ended Japan’s three-decade self-imposed ban on arms exports. Surveys taken then also showed most Japanese opposed selling weapons to other countries.

Military threat
Ironically, China may have inadvertently helped Abe. By choosing to challenge Japan’s ownership of the disputed Senkaku/Daioyu islands militarily instead of legally, it has helped reinforce the prime minister’s argument that Beijing is throwing its weight around the East China Sea. The Japanese media has faithfully recorded a stream of incursions by Chinese surveillance ships and planes from China into Japanese waters.

The impact has been striking: The same Asahi poll that found such strong support for article 9 also said 55 per cent of respondents view China as a military threat to Tokyo.