The government is considering a solution that it has so far shunned: mass immigration 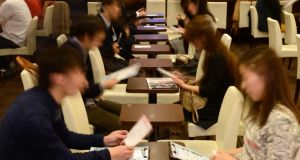 Attendees take notes while talking to each other at a matchmaking party hosted in Tokyo. Japan’s fertility rate is among the lowest in the world and its demographic dilemma grows more urgent year by year. Photograph: Akio Kon/Bloomberg

Earlier this year Japan’s government issued another alarming sign that a demographic time bomb is ticking away under the world’s third-largest economy.

Japan’s population began falling in 2004 and is ageing faster than any other country on the planet. More than 22 per cent of Japanese are already 65 or older.

A government-linked report released two years ago warned that by 2060 the number of Japanese will have fallen from 127 million to about 87 million, of which almost 40 per cent will be 65 or older.

This week the government did not deny reports that it was considering a solution that it had so far shunned: mass immigration. Newspaper reports say the figure being suggested is 200,000 foreigners a year.

An advisory body to Japanese prime minister Shinzo Abe said last month that opening the immigration drawbridge to that number would help stabilise Japan’s population at about 100 million.

But there’s a catch: to hit that target the government would also have to raise the fertility rate from 1.39 – one of the lowest in the world – to 2.07. Experts say that would require major surgery to the country’s entire social architecture by making it easier for mothers to work.

She says poor childcare and nursing care support is a key reason for the lack of babies.


International scrutiny
Abe has invoked Matsui in his quest to boost the birthrate. Last year he penned an essay pledging to put women into 30 per cent of leadership positions by the 2020 Olympics, when Japan will be under unprecedented international scrutiny. That might encourage women to have more children.

The problem for Abe is that the position of Japanese women appears to be going into reverse. The latest Global Gender Gap Report , compiled annually by the Swiss-based World Economic Forum, ranked Japan 105 out of 136 countries, down 25 places from 2006. South Korea – another country with a fertility crisis – came in at 111th place.

The looming crisis so alarms the government that it created (in 2005) a ministerial post to raise fertility – with negligible impact.

Last year a 20-member panel under the ministry produced a desperate wish list to reduce what it calls “deterrents” to marriage and child rearing. It included a proposal to assign lifelong gynaecologists to young women and even financial support for “spouse-hunting” projects.

Hence the prime minister’s reluctant turn to immigration. Here too, however, he faces tough choices. The United Nations estimates that without raising its fertility rate, Japan needs about 650,000 immigrants a year. There is no precedent for that level of immigration in what is still a largely homogenous country.

Roughly 2 per cent of Japan’s population is foreign and even this figure includes large numbers of permanent residents – mostly Chinese and Koreans – who have been there for generations. Tellingly, the story about the latest government immigration discussions broke in the right-wing Sankei newspaper, which is unlikely to embrace the idea of a Chinese family on every Japanese street.


Mammoth budget
Japan’s demographic dilemma grows more urgent year by year. This week the government passed the nation’s largest yet budget – a mammoth $937 billion (€679 billion) package swelled by welfare and pension spending. Japan is already weighed down by one of the world’s largest public debt burdens. With its inverted population pyramid, where will the taxes to look after its ageing population and pay off this debt come from?

Japan could plausibly learn to live with the inexorable shrinking of its population.

The 2012 government report said that without policy change, by 2110 the number of Japanese could plummet to 42.9 million – a third of its current population. But that might mean also embracing a far diminished economic and political role in the world, and Abe would seem to be the last person to accept that.