The runners will serve remote mountainous constituencies during forthcoming byelections 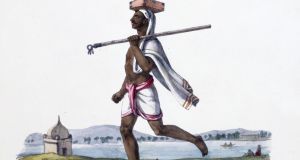 More than a century after “messenger runners” disappeared in India, they are making a comeback for byelections in the country’s northeastern Meghalaya state scheduled for later this week.

The federal election commission, which is responsible for supervising all elections in India, has hired 15 “able-bodied men” as runners to establish a communication link between its offices and two remote mountainous constituencies before and during voting on August 23rd.

Ranikor and South Tora assembly constituencies have few roads, and are connected to the rest of the province via narrow dirt tracks and pathways. Mobile connectivity during the ongoing monsoon season is mostly non-existent.

This combined lack of adequate roads and telephone connectivity compelled the commission to hire a group of runners to keep it informed about preparations for voting and events on polling day.

Chief electoral officer Frederick Roy Kharkongor said Ranikor assembly constituency had five polling booths, of which the furthest was 45km away from the nearest road.

He said that several runners had been assigned the task of jogging this distance in relays carrying messages to and from the commission.

Both assembly constituencies have the best long-distance runners in the region as their remoteness forces locals to travel to nearby towns on foot.

Locals, however, warned that monsoon rains would make the muddy mountain trails somewhat hazardous for the runners.

The commission hired runners during statewide assembly polls in February, but did not deploy them, as mobile telephone connectivity at the time was satisfactory.

Messenger runners in India date back to the advent of Mughal rule in the 16th- and 17th-centuries, when they were used to gather and disseminate intelligence and convey important messages. They were also employed by merchants to execute commercial dealings.

India’s British colonial rulers who followed the Mughals two centuries later expanded their role, using them to distribute mail and other packages across the country.

These runners were reimbursed according to the distance they travelled and the weight of the mail – known locally as dak – which they transported.

They would hand over their mailbags and packages at quaint dak bungalows, which still dot India’s countryside, functioning today as rest houses for touring government officials.

Many such runner mailmen, who often had to run the gauntlet of wild animals, brigands and marauding bands of adventurers, were immortalised in local folklore and portrayed as heroes in regional cinema.

Mail runners became redundant in India in the late 19th- and early 20th-centuries after the spread of the railways, except for in some remote Himalayan regions where connectivity still remains inadequate.