A century on, the first ever official commemorations of conflict take place 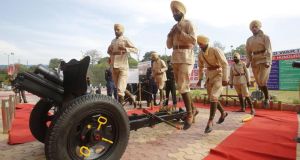 After a century in denial, India is starting to acknowledge the role played by more than a million of its soldiers in helping its British colonial masters win the first World War.

The first official commemorations of this hitherto ignored military participation began in early March, with prime minister Narendra Modi placing a wreath at the Flame of the Immortal Soldier at India Gate in the heart of New Delhi.

He then visited the first government-backed photo exhibition, portraying the bitter campaigns fought by the Indian expeditionary force in Europe, Mesopotamia, east Africa and in the Middle East.

“I urge our youth to visit this exhibition to learn about the war in which nearly 74,000 of our men were martyred in far-flung lands,” Modi said in a tweet. The prime minister, aged 64, was born four years before Indian independence in 1947.

More than 65,000 Indian soldiers, part of the largest volunteer force deployed in the first World War, were wounded in the fighting. Many of those who took part had never ventured beyond their rural villages before going overseas to fight.

But despite this participation, no official history of the Indian army’s decisive role exists domestically, other than isolated and sketchy personal narratives and scattered regimental accounts.

India, it appears, was historically and politically ashamed of having fought a war on behalf of its colonial rulers. The dominion status that many Indians had expected in return for contributing men and treasure – £100 million at the time, equivalent to more than £1 billion today – to the British war effort, proved speculative.

The British were in no hurry to reciprocate and returning soldiers got no heroes’ welcome home. Instead, most nationalist Indians looked upon them as the lackeys of oppressive colonialists.

It took another world war – in which Indian soldiers were, yet again, the largest volunteer force to participate – for India to win independence. This happened two years after the war ended in 1945.

More recently, researchers from the Centre for Armed Forces Historical Research in Delhi have begun collating data on the Indian army’s role in the Great War.

“India is now adequately removed from its colonial past to be able to dispassionately review the significant role its soldiers played in World War I,” said retired squadron leader Rana TS Chhina, who heads the centre.

First World War records did not exist in India, he said, but the centre had been collaborating with Commonwealth countries to piece together India’s role in it.

Even Germany had provided a fascinating wealth of detail, including rudimentary film footage and audio recordings on Indian prisoners of war, especially the Sikhs, whom they considered an oddity, he said.

Once completed, these accounts will be disseminated through publications and exhibitions.

There are many contemporary British first World War accounts but these show a cynical attitude of discrimination against Indian soldiers even though they frequently helped win critical battles.

Many such versions, for instance, riddled with the appalling horrors of trench warfare, convey the impression that the victims of this ghastly phenomenon were Europeans only.

But thousands of Indian soldiers perished alongside Europeans on these killing fields or were disabled for life. This is one anomaly the Historical Research Centre and other Indian and overseas scholars aim to rectify.

Indian army combat units also had no native officers until 1917, as the British considered all such appointments seditious and aligned to the fledgling freedom movement.

In addition, almost all Indian combatants faced serious difficulties not only from the brutal fighting, but also from religious, social and dietary taboos.

These difficulties are detailed in the soldiers’ despairing letters home. These were released recently by the British Library in London and collated in historical anthologies for the first time.

Some scholars argue that the Indian army’s contributions to the two world wars were deliberately marginalised due to Winston Churchill’s visceral dislike of India and Indians, whom he termed a “beastly people with a beastly religion”.

The arch imperialist particularly disliked Mahatma Gandhi, whom he insultingly referred to as a “half naked, seditious fakir”(mendicant).

However, in a long-delayed irony, the Mahatma’s statue was unveiled on March 14th at Parliament Square in London close to that of Churchill.

And the Indian army’s role was gratefully acknowledged last November in the House of Commons’ Churchill Room, while a slew of books and documentaries detailing its critical role have also been published.

India’s 1.1 million soldiers who readily fought and died for their oppressive British rulers, it seems, are finally beginning to be honoured.