Hindu man hacked to death at his shop in Bangladesh

Complaint that victim had made comments against Prophet Muhammad in 2012 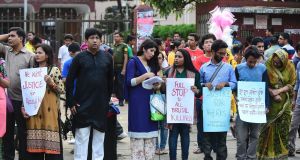 Bangladeshi protesters during a demonstration against the killing of a university professor in Dhaka, who was one of the recent victims of a spate of recent killings by radical Islamists. Photograph: AFP/Getty Images

A Hindu man has been hacked to death in Bangladesh in the latest in a spate of similar attacks in the South Asian nation.

Police officer Aslam Khan said authorities are investigating whether Saturday’s attack of Nikhil Joarder in the central district of Tangail is connected to a 2012 complaint that he had made comments against Prophet Muhammad.

Mr Khan said Mr Joarder was attacked with sharp weapons by two men on motorcycles as he sat in his tailor shop.

No-one has claimed responsibility for the attack.

The attack was similar to recent killings of atheist bloggers, academics and most recently a gay rights activist in Muslim-majority Bangladesh by radical Islamists.

Mr Joarder spent two weeks in prison in 2012 and was released after the complaint against him was withdrawn.