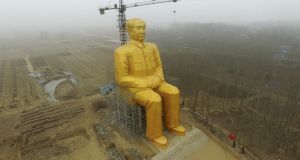 A giant golden statue of the late Communist Party leader, Mao Zedong, erected in the remote Chinese countryside, has been torn down, removed almost as quickly and secretly as it was built.

The 36.6-metre high statue of the founding father of the People’s Republic of China appears to have been taken down after negative publicity in Zhushigang in the Tongxu prefecture in the central province of Henan.

Some internet commentators said it was a waste of money in a poor region, while others called it an act of hubris.

A report in the People’s Daily quoted an official in Zhushigang saying the statue had not been registered and approved, and had now been removed. The paper also quoted land resource officials at Tongxu county confirming its removal, but they did not know why it was taken down.

Photographs online show the gold-painted structure, which was nearly finished when it generated headlines around the world, being disassembled. The statue reportedly cost nearly three billion yuan (€427,000), and was paid for by local entrepreneurs and residents.

This year is the 40th anniversary of the Great Helmsman’s death. He is widely revered in China, although he is blamed for the deaths of millions in the Great Leap Forward. Henan province was one of the areas worst hit by the failed agricultural experiment in the 1950s.

He was also responsible for the Cultural Revolution, a period of ideological fundamentalism which saw hundreds of thousands oppressed by Red Guard zealots.