Thousands of highly radioactive spent fuel rods must be disassembled 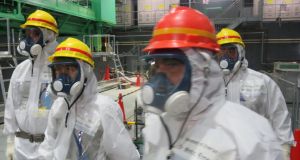 Engineers at the Fukushima nuclear plant must remove thousands of highly radioactive spent fuel rods one by one and deal with the risk of fire or the fuel pool boiling dry. Photograph: AP Photo/Tokyo Electric Power Co

Nuclear engineers in Fukushima are preparing to tackle what may be the most dangerous stage of the clean-up operation at the ruined nuclear plant – removing thousands of highly radioactive spent fuel rods.

Experts have warned that the task could trigger another nuclear crisis if it goes wrong but operator Tokyo Electric Power Co (Tepco) swatted away such concerns on Thursday during a rare tour of the Daiichi plant.

“In my view, the potential for another disaster is very close to impossible,” plant manager Akira Ono said. “Removing spent fuel is done at any ordinary nuclear power plant.” Tepco says the operation could begin next week.

The utility’s confidence is questioned, however, by, among others, Japan’s former ambassador to Switzerland, Mitsuhei Murata, who has warned of “catastrophe” if the operation goes badly. “The lack of a sense of crisis about this is abnormal,” he said. “The world must not ignore this operation.”

Journalists were shown the storage pool in Unit 4, which was wrecked in a hydrogen explosion. The nuclear fuel inside three of the plant’s six reactors melted down after the facility was pummelled by a huge earthquake and tsunami in March 2011. Over 1,500 fuel assemblies, each containing 80 uranium rods, have been precariously kept in the No 4 building since.

Radiation
Engineers have built a new building alongside the damaged unit and a crane to remove the fuel, which will be placed in sealed casks and taken to a more stable storage area. The fuel must be kept in water or it will overheat and release radiation, warned the head of the operation, Takashi Hara.

Several stages of the operation are considered hazardous. Engineers must remove each fuel assembly one by one, without incident, and deal with the risk of fire or the fuel pool boiling dry. Debris that rained into the fuel pool after the 2011 blast could hamper the removal, admitted Mr Ono. “We have removed large debris and cleaned with a water vacuum, but there is a possibility that very small pieces of debris were left behind there and will affect the operation’s smoothness.”

Work on Unit 4 will take place amid the ongoing struggle to plug radioactive leaks at the plant. Tepco has sandbagged the ocean-side of the facility in an attempt to stop water laden with strontium and other toxins from reaching the Pacific. The company is building a $450 million underground “ice wall” to block groundwater in a plan that many experts have called fatally flawed.

Tangled metal
The Daiichi site is still a mess of makeshift piping, tangled metal and debris left over from the disaster. Overturned cars and cranes rust behind newly erected seawalls. Pipes carry water from the damaged reactors to a hanger-like decontamination facility, where caesium and dozens of other toxins are removed. Over 1,000 storage tanks, holding a combined 350,000 tons of contaminated water, crowd the 860-acre site. Hundreds of trees have been removed to make space for more tanks.

Engineers deny they are running out of space to store the toxic water. “We have space to double the onsite storage capacity,” said a Tepco official. The head of Japan’s nuclear watchdog, Shunichi Tanaka, has warned that the water will eventually have to be dumped into the ocean, once it has been decontaminated to safe levels.

Mr Ono waived away concerns about the shockingly dishevelled state of the plant over 32 months since the crisis erupted. “You journalists must be surprised to see cables and pipes lying everywhere. For the past 2½ years we have our hands full responding to the task at hand. Decommissioning will last 30 and 40 years. I think we need to change our system, organisation and the way we work to reflect that.”