Activists calls for ban on traditional festival where 10,000 animals are killed and eaten

The annual dog and cat meat festival in Yulin in southeastern China featuring the sale of animals to be eaten with lychees has opened amid vocal opposition from animal rights groups. Video: Animal Hope and Wellness Foundation 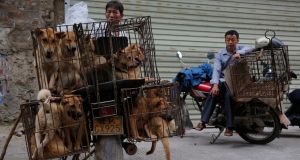 Vendors at the the Yulin dog meat festival: The festival highlights the dichotomy between an increasingly modern urban China and rural areas that still cling to old traditions. Photograph: Wu Hong/EPA 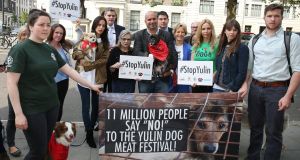 The annual dog and cat meat festival in Yulin, featuring the sale of animals to be eaten with lychees, has opened in southeastern China amid vocal opposition from domestic and international animal rights groups.

About 10,000 dogs and cats will be killed and eaten during the 10-day festival, in Guangxi province, that 11 million people signed a petition calling for the banning of.

The festival highlights the dichotomy between an increasingly modern urban China and rural areas that still cling to old traditions and feel left behind by the country’s economic advances.

Dog is seen as a warming meat and has been part of the diet for over 7,000 years. The meat is predominantly eaten in the chilly northeast, close to the Korean border, and is widely believed to have medicinal qualities such as an ability to lower blood pressure and increase virility.

In a quick online poll asking “Why do you eat dog or not eat dog?” answers ranged from “Dogs are tasty” to “I’ve had a pet dog since I was a child, I won’t eat dog” to “They taste gross, I don’t favour that kind of meat.”

“We’re still seeing market stalls and mopeds piled with the typical brown blowtorched bodies of dogs, but as yet nothing like the scale you might expect to see,” he said.

“We have long had the habit of eating dog meat. To us eating dog is no different from eating chicken, ducks, bulls or sheep. It is a custom of eating,” he said.

Local taxi drivers said that the festival was growing in popularity.

“More and more locals are taking this day as a festival, mainly to get together with family and friends,” said one.

Meanwhile, on the Weibo weblog, Xiao Xuan posted: “As long as eating dog and killing dogs is legal, I don’t see why we need to shut it down.”

An array of international celebrities have weighed in behind the campaign to have the festival banned. The Animal Hope and Wellness Foundation ran a video showing footage of stars such as Matt Damon, Kate Mara, Sia, Pamela Anderson, Joaquin Pheonix and others, many of them in tears, saying they were “a voice for those who cannot speak for themselves”.

For the China Daily, the problem is an issue about illegal dog meat trade, and it highlighted the plight of dog-meat lovers who were hospitalised after eating meat from stolen pet dogs who had been killed using poison.

“Dog lovers need to refrain from criticising those who eat dog meat while those with a taste for dog meat should refuse to buy illegally traded dog meat. This is a point which an increasing number of members from both groups are accepting,” the commentary says, without any reference to data to back up the claim.