Chinese group says flower came from China, thrived in Japan and has nothing to do with South Korea 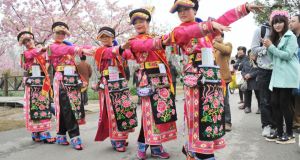 Cherry blossom time: performers dance during a festival for the flower at Gucun Park in Shanghai, China. Photograph: ChinaFotoPress via Getty Images

The sakura, or cherry blossoms, are especially iconic in Japanese culture, which has long claimed the delicate pink flowers as a native species and celebrates their blooming each year with festivals and picnics.

So you can be sure that claims by a Chinese industry representative group that the sakura is actually native to China – not to Japan and certainly not to South Korea – is sure to fuel ongoing tensions between the three neighbouring east Asian giants.

The South Koreans have also claimed it as their own, saying a prized variety originated on Jeju island.

With the blooms offset against the hypermodern skyline of Tokyo or the traditional architecture of Kyoto, people hold hanami, or flower-viewing parties, under cherry blossom trees in full bloom. This follows a tradition hundreds of years old, back to when aristocrats would look at the blossoms and write poetry.

This year, Japan’s Meteorological Agency announced on March 29th that Tokyo’s cherry blossoms had reached full bloom five days earlier than usual. Now He Zongru, head of the China Cherry Industry Association, claims that the blossom is Chinese. He even quotes a Japanese monograph to back up his claim.

The monograph says the sakura originated in the Himalayan mountains of China and did not arrive in Japan until the Tang dynasty more than 1,100 years ago, making cherry blossoms as intrinsically Chinese as rockets, pasta, kiwi fruit and golf.

“We don’t want to get into a war of words with Japan and South Korea, but we want to assert a fact,” Mr He told the Guangzhou-based Southern Metropolis Daily. “Many historical documents confirm that the cherry blossom’s place of origin is in China.

The background to the dispute is steeped in the row over islands in the East China Sea and Tokyo’s perceived failure to properly atone for second World War atrocities.

Both China and Japan claim an archipelago – known as the Senkakus in Japan, to whom they officially belong, and the Diaoyus in China.