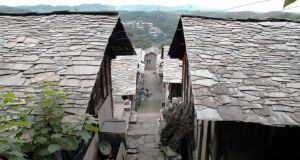 Seizures of land and older buildings across China, a major cause of unrest in the country, have been fuelled by soaring prices and the government’s urban expansion drive, resulting in often violent clashes between officials and villagers. Photograph: PA

Hong Xiaorou was killed in Fujian province when the bulldozer hit her yesterday despite her grandmother screaming for the vehicle to stop, a provincial government-run news website said.

Authorities said the death was an accident and that they had detained those responsible, according to the website.

Seizures of land across China, a major cause of unrest in the country, have been fuelled by soaring prices and the government’s urban expansion drive, resulting in often violent clashes between officials and villagers.

Outdated laws mean farmers have little legal recourse to oppose land grabs - which commonly feature village leaders selling off plots to a developer with little or no consultation - or to demand fairer compensation.

The girl’s death has been widely discussed on Weibo, especially as it follows a series of grisly incidents involving children.

Chinese police had said they were hunting a woman suspected of gouging out the eyes of a six-year-old boy, state media reported yesterday.

“Recently there have been so many children who have been injured and so many reports of deaths,” a microblogger wrote. “Please stop hurting children.”