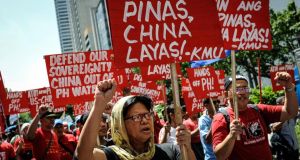 Anti-China protesters protest against China’s territorial claims in the Spratly islands in the South China Sea in front of the Chinese Consulate on July 12th, 2016, in Makati, Philippines. Photograph: Dondi Tawatao/Getty Images

An international arbitration court’s ruling that China’s territorial claims in the South China Sea have no legal basis has increased the possibility of armed conflict in the region, but an irate Beijing is most likely to ignore the decision and push for talks with its neighbours instead.

This poses serious questions for international law, because if The Hague’s ruling is not enforced, China can simply negotiate with the Philippines and other countries in the region on its terms, and ignore the tribunal’s dismissal of China’s “nine-dash line”, which unilaterally grants Beijing 90 per cent of the South China Sea.

Shi Yinghong, a professor of international relations at Beijing’s Renmin University, said he expected China to try to mobilise the governments of various countries to support a bilateral agreement to resolve the dispute between the countries involved.

“Under the premise of not starting any military conflict with the US, China will at the same time increase the scope and frequency of military activities in the South China Sea to show its tough attitude in this issue,” Shi told The Irish Times.

Many believe the new Philippines government under Rodrigo Duterte will take a more conciliatory approach, and Mr Duterte has already signalled his readiness to discuss the issue with China.

“China will dismiss the verdict, arguing that the tribunal doesn’t have jurisdiction in this matter - but it will be very difficult for them to continue to push aggressively on their claims in the South China Sea,” said Duncan Innes-Ker, regional director Asia at the Economist Intelligence Unit. 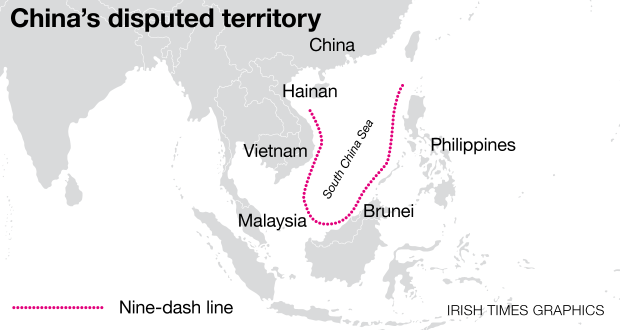 The Philippines application to the United Nations Convention on the Law of the Sea (Unclos) tribunal, made up of five leading maritime law experts, which was established by the Permanent Court of Arbitration in The Hague, was a rare act of defiance.

Unclos is an international treaty, signed and ratified by both China and the Philippines, which basically functions as a constitution of the seas.

The Philippines brought the legal challenge in the South China Sea territorial dispute following a stand-off in 2012 after Philippine authorities tried to apprehend Chinese fishing boats near the Scarborough Shoal.

“The tribunal’s ruling not only benefits the Philippines, it also benefits other States bordering the South China Sea like Indonesia, Malaysia and Vietnam … If China’s ‘nine-dash line’ is invalid as to the Philippines, it is equally invalid to those states and, indeed, the rest of the international community,” Paul Reichler, a lawyer with the law firm Foley Hoag LLP, which led the Philippines’ legal team, said in an emailed statement.

Even though Brunei, Malaysia, Singapore and Vietnam all dispute China’s sovereignty over various island chains and nearby waters in the South China Sea, China has built fortifications and expanded its presence there unchecked for several years now.

The United States did not take any formal international legal steps to check China’s activities other than staging military exercises, dispatching the occasional aircraft carrier to the region and grumpily making known its dislike of China’s expansionism.

Part of this is because the US itself has a questionable record on observing international law in third-party disputes.

In 1986, Washington ignored a decision of the International Court of Justice over attacks on Nicaragua, saying the court lacked jurisdiction.

China has pointed to this case on several occasions as justification for its actions.