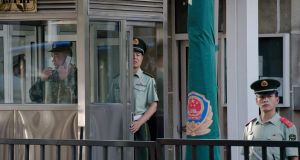 Chinese paramilitary police officers secure the entrance of the Philippine embassy in Beijing: The road to the mission was closed off by authorities although the situation remained calm. Photograph: Nicolas Asfouri/AFP/Getty Images

Beijing issued a swift and irate response to a ruling by an international tribunal in The Hague in favour of the Philippines on China’s claims over disputed territory in the South China Sea, saying the findings were “null and void”.

President Xi Jinping said China would not accept any proposition or action based on the decision by the tribunal, state media reported.

“China has always been a guardian of international rule of law and of fairness and justice, and will always adhere to the path of peaceful development,” Mr Xi said after meeting European Council president Donald Tusk and European Commission president Jean-Claude Juncker in Beijing.

Manila took its complaints over China’s claims to large parts of the South China Sea to The Hague in 2013, seeking to affirm its right to areas within 200 nautical miles of its coastline.

China had claimed all the area within the “nine-dash line”, a U-shaped area that extends hundreds of kilometres to the south and east of its island province of Hainan and includes the Spratly Islands, the Paracels and remote sandbars such as the Macclesfield Bank, the Scarborough Shoal and the Pratas Islands. The “nine-dash line” was drawn up after Japan was defeated in the second World War.

“The tribunal concluded that there was no legal basis for China to claim historic rights to resources within the sea areas falling within the ‘nine-dash line’,” the court said in a statement.

There was a heavy police presence around the Philippine embassy in Beijing yesterday and the road to the mission was closed off, although the situation was calm. The decision puts China in an awkward position, as even though it refuses to acknowledge the finding, it is also legally bound to accept it under international law.

Mr Xi’s remarks were in line with a statement from the foreign ministry saying the arbitration case by the Philippines was “biased and evil, it doesn’t aim to resolve the dispute with China nor maintain peace and stability in the South China Sea but denies China’s territorial and maritime sovereignty”.

After attacking the ruling itself, China has signalled negotiations may be next, thereby sidestepping the ruling from the UN Convention on the Law of the Sea (Unclos) tribunal.

“Now the farce is over it’s time to get back to the right track. China has taken note of the signals from the Philippine government that it is willing to resume discussions over the South China Sea issue,” foreign minister Wang Yi told state broadcaster CCTV.

The 3.5-million square kilometre South China Sea offers access to the entire Southeast Asian region and upwards of €3.5 trillion worth of trade passes through it every year. It is rich in oil and gas, and home to abundant fishing grounds.

China’s claims have brought it into conflict with, as well as the Philippines, Brunei, Malaysia, Taiwan and Vietnam, all of whom dispute China’s sovereignty over various island chains and nearby waters in the South China Sea.

In the Philippines, cabinet members were preparing a summary of the decision for newly installed president, Rodrigo Duterte. “The solicitor general [Jose Calida] shall provide the president a synopsis of the ruling tomorrow morning and a complete and thorough interpretation in five days,” palace communications secretary Martin Andanar told the Rappler news site.