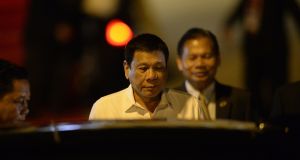 The president of the Philippines has escalated his campaign of obscene abuse at perceived opponents, foreign and domestic, by calling Barack Obama a “son of a whore”.

Rodrigo Duterte warned the US president to keep off the subject of extrajudicial killings in his country’s brutal drug war when they meet on Tuesday at a regional summit in Laos, telling a press conference that Mr Obama “must be respectful”.

Mr Duterte has faced condemnation from human rights campaigners, diplomats and the UN for inciting a war on drugs which, according to official figures published on Sunday, has led to 2,400 deaths in just two months.

Mr Duterte was answering a reporter’s question on Monday about how he intended to explain the extrajudicial killings to Mr Obama, before boarding a plane to Laos for the Association of Southeast Asian Nations summit.

“You must be respectful. Do not just throw away questions and statements. Son of a whore, I will curse you in that forum,” Mr Duterte was quoted by as saying by Agence-France Presse. “We will be wallowing in the mud like pigs if you do that to me.”

The two leaders had been due to hold a meeting on Tuesday on the sidelines of the summit. However, after news of Mr Duterte’s remarks reached the Mr Obama, that appeared to be in doubt.

Mr Obama said he was asking his staff to find out whether a meeting would be useful. “What I’ve instructed my team to do is to talk to their Philippine counterparts to find out is if this in fact a time where we can have some constructive, productive conversations,” Mr Obama said at a news conference at the end of the G20 summit in China.

“Obviously the Filipino people are some of our closest friends and allies and the Philippines is a treaty ally of ours. But I always want to make sure that if I’m having a meeting that it’s actually productive and we’re getting something done.”