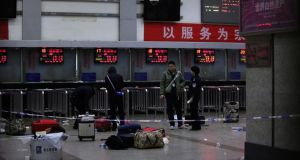 Police at the ticket office at Kunming railway station in China’s Yunnan province after a group of armed men attacked people on Saturday evening. Photograph: Reuters

Police in China say they are still searching for five of the attackers who went on a bloody rampage in Kunming’s central train station late on Saturday, leaving 29 dead, scores injured and a frightened population in the south-western Chinese city.

Authorities in Kunming blamed Islamist separatists from the restive western province of Xinjiang for the attack.

At least 10 male and female attackers, dressed in black and carrying long knives, chased terrified victims through the station. After police arrived, four assailants were shot dead and one female suspect was injured during the assault.

Li Song, who works for a local broadcaster in the nearby city of Qujing, was in the city to meet his university classmates.

After Mr Li came out of the train station he heard multiple shots, he told The Irish Times .

He thought initially it might have been a thief, but then a large detachment of police entered the station. More gunfire followed, and he went to the train station and saw five people lying on the ground, amid general chaos.

The station was quickly surrounded by emergency vehicles and people were lying on stretchers or being brought to ambulances.

One person was saying: “They came to kill whoever they could.”

President Xi Jinping ordered that no effort be spared to track down those behind the attack.

“Severely punish in accordance with the law the violent terrorists and resolutely crack down on those who have been swollen with a rampant attitude,” the Xinhua news agency quoted him as saying. “Understand the serious and complex nature of combatting terrorism . . . go all out to maintain social stability.”

Chinese people were baffled as to why the assailants chose Kunming, the provincial capital known as the “spring city” because it has a singularly pleasant climate.

However, the timing seemed aimed at disrupting China’s annual parliament, the twin sessions of the National People’s Congress, and its consultative body, the Chinese People’s Political Consultative Conference (CPCCC), which are due to kick off this week.

Paulzhang 007 wrote on social media site Sina Weibo: “Why did they choose this time and a non-political city? It is very obvious that they want to make trouble for the two sessions. No matter how you want to fight, you should not hurt innocent people!”

The iFeng website showed photographs of an Islamic separatist flag which was reportedly found at the scene of the attack.

In October, Islamist militants drove a jeep through pedestrians at the Forbidden City, killing two tourists, as well as the three occupants of the vehicle, and left 40 injured.

Xinjiang is home to the Muslim Uighur people, many of whom believe their culture is being overrun by Han Chinese culture.

Xinjiang’s eight million Turkic-speaking Uighurs are an ethnic group that shares close linguistic and cultural links to central Asia and are distinct from China’s majority Han.

In July 2009, local Uighurs turned on Han Chinese in Urumqi – an incident that led to deadly reprisals by Han on Uighurs a few days later. The riots killed

almost 200 people, most of them ethnic Han Chinese, and left more than 1,700 wounded.

“We should launch a nationwide campaign against such terrorist activities and resolutely fight the terrorists,” Yin Zhuo, director of the expert consultation committee of the People’s Liberation Army Navy, told the Xinhua news agency.

“The well-planned attack was not an issue of ethnics or religion, it was an issue of terrorism with links to the terrorist forces out of the country,” said Mr Yin, who is also a member of the CPPCC.