‘Anyone can murder a woman in Honduras and nothing will happen’ 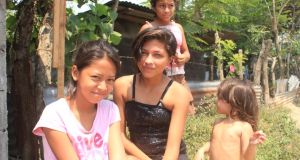 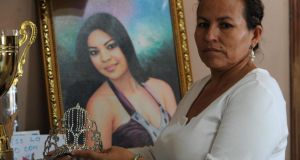 The windowless room in downtown San Pedro Sula, Honduras’s second city, bustles with activity as more than a dozen women take their seats at a long oak table. Water bottles are distributed and the electric fan switched to full blast to alleviate the oppressive summer heat creeping through the half-open door.

As the chatter dies out, Dicsa Bulnes clears her throat, introduces herself and begins to speak.

“As a woman I feel trapped. I am a prisoner in my own home, there’s nowhere for me to go. I have no freedom.”

Bulnes, who is from the marginalised Afro-Caribbean Garífuna community, pauses for a moment to take a sip of water before she continues.

“My partner nearly killed me. He still sends me threatening messages on my mobile attacking me. I’ve tried reporting him but the authorities won’t do anything. It feels like they are forcing women to buy their own coffins, to return to the attacker and suffer through the violence.”

Bulnes is a member of the Foro de Mujeres por la Vida (Women’s Forum for Life), an organisation which campaigns for women’s rights in a country that increasingly turns a blind eye to the violence and persecution that plagues the lives of countless women.

The forum has called a meeting in its small San Pedro Sula office so a female journalist from a safe western country can hear about the daily battles endured by the women of this small central American nation.

Aside from having one of the highest murder rates in the world – a national homicide rate of 79 per 100,000 – Honduras is rapidly becoming one of the most dangerous places on Earth for women.

Over the past decade, this nation of just over eight million people has witnessed a sharp increase in domestic and sexual violence and gender-based murder, a phenomenon known as femicide.

According to the University Institute for Democracy, Peace and Security in Honduras, 531 women were murdered in 2014, the majority of these aged between 15 and 24. Although this number was slightly lower than that of the previous year – there were 636 recorded murders of women in 2013 – the lack of accountability for this violation of a woman’s most basic human right has normalised the concept of femicide.

“The increased militarisation of the country means all measures now focus on weapons and the military, while any measures that were taken to protect women’s rights have been completely abandoned,” says Sierra.

“It’s almost like there’s a carte blanche for the assassination of women. Anyone can murder a woman in Honduras and nothing will happen.

“With this lack of accountability, women’s bodies are being used to send a message of fear and hate to the rest of the population.”

Teenage girls living near the bustling food markets in the capital, Tegucigalpa, face the same level of violent abuse. Sarai (19) says many of her friends became pregnant when they were only 12 or 13 after meeting gang members in the marketplace. She says gangs “own the barrios” of Tegucigalpa, controlling how women walk, talk and dress.

“They walk around the area monitoring everyone who comes in and out. They know exactly what’s going on and every single detail of our lives.”

Wendy (14) says women and girls are the first to suffer under this brutal culture of drugs, extortion and violence. Freedom of speech doesn’t exist in a world where the maras youth gangs rule the streets.

“All I can see around me is violence; there never seems to be any light. Women don’t have the freedom to walk down the street without worrying about being attacked. The men rule and the women must follow.

Supaya Martínez, co-director of the Centre for Women’s Studies Honduras, says gangs govern every aspect of a woman’s life, down to the colour she uses to dye her hair. “If a woman dyes her hair the wrong colour, the local gang will kill her.”

Martínez says people have learned to justify femicide by arguing that female victims are involved in gangs or connected with drug traffickers.

“It’s as if it was their fault. They place the blame on the victim and basically say she was responsible for her own death.

“There hasn’t been a strong enough response from the government to end this. Women die every day but no one is punished and so the crimes just continue.”

Last year UN special rapporteur on violence against women Rashida Manjoo called for the Honduran government to address the “climate of widespread and systematic crime, corruption and impunity”.

“We’re living in a country where women don’t feel safe enough to report acts of violence to the authorities,” says Sierra, adding that many women who speak up about injustice must pay for it with their lives.

“Men are killing women with rage, fury and cruelty. We’re scared to speak out but this is the daily lot we’re living.

“We’re forced to live in a culture of violent machismo which has become a natural, accepted part of Honduran society.”