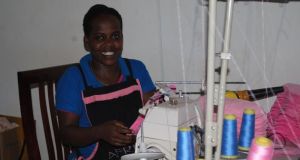 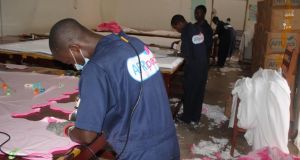 Phionah was in school when she first menstruated. She recalls that she bled through her uniform, and the boys and girls laughed at her so she ran out of class. She did not want to go back the next day, but she was in boarding school, and there was “nowhere else to go”. Neither her parents nor her teachers had told her about menstruation, or what to do once it happened. She says that underneath her embarrassment there was also confusion and fear.

In Uganda menstruation is often stigmatised and surrounded by myths and false information. According to Sophia Grinvalds, co-founder of AFRIpads, which makes reusable sanitary pads in Uganda, there are many taboos and cultural beliefs around what girls can and cannot do when menstruating.

“There’s misconceptions about losing your fertility if you do certain things when you have your period,” she says. “In one part of the country there’s a belief that if a girl on her period, or a woman on her period, walks through your garden when you’re growing vegetables, that everything in your garden will die.”

Such claims are of course purely superstitious, and most are essentially harmless. Others are potentially very damaging. There is a myth that anyone who experiences pain during menstruation should have sex to take the pain away. Grinvalds describes this as a “particularly sad misconception” and says that as a result “young girls, adolescent girls, are then engaging in sex far earlier than they would have, because they think it’s a way of actually addressing the pain that they feel”.

Similarly, menstrual stigma and the resulting embarrassment can have ramifications for people. According to Grinvalds, experiences in front of peers such as Phionah’s have a lasting effect, not only on the girl it happens to but also on the girls who witness it and then fear the same embarrassment. “The girl’s experience is so traumatic that she will typically run home,” she says. “But it is enough of a traumatic experience to affect all the other girls, or a large number of them, who will stay home out of fear.”

In Uganda it’s not uncommon for girls to miss school when they’re menstruating. The Ugandan government says about 23 per cent of girls drop out of education once they hit puberty and adolescence.

Grinvalds says the situation is “more complex than just ‘I need a pad to stay in school’”, but she says there is a notable correlation between the onset of menstruation and a decline with girls’ enrolment. “If a girl doesn’t have pads or some way to keep herself comfortable and protected in school she very often will just stay home.”

She says sanitary pads are available in Uganda, but not always. While they are generally sold consistently in urban areas, such as Uganda’s capital Kampala and larger towns, they are not always affordable. In contrast, in rural villages women must rely on the stock from local trading centres and small stalls, whose owners wait until they run out of a variety of goods before they travel to the city to restock. As a result, many shops in rural areas are sold out of certain products for prolonged amounts of time, and pads are recurrently absent.

With a lack of accessibility to sanitary pads, girls and women in Uganda are forced to improvise. Most use ripped-up cloth each month, from old bed sheets, washcloths or T-shirts. But, for some, cloth is not always available. They are forced to improvise with whatever materials are available to them, including sand, stones, leaves or dried mud.

In recent years, however, the Ugandan government has taken significant steps to encourage more widespread use of sanitary pads. In 2009, after pressure from female members of parliament, pads were declared VAT exempt, in an effort to make them more affordable. In 2013 there was a further push from women MPs for a lift on importation tax, which the government has agreed to implement, according to Ugandan media.

Since 2014 the ministry of education and sports has also taken steps regarding young girls’ menstrual health, by integrating menstrual hygiene management into the school curriculum, and suggesting that schools keep emergency supplies for girls, including spare uniforms and sanitary pads.

Furthermore, on international Menstrual Hygiene Day last May, parliament issued a charter on menstrual hygiene management that stated all schools should create separate toilets for girls and boys and have adequate sanitation and wash facilities. It also stated that girls should be equipped with life skills to manage their menstruation, including being able to make their own sanitary pads.

AFRIpads was born out of the need for such supplies. Grinvalds and her now husband, Paul Grinvalds, founded it in 2009 as an effort to create reusable, environmentally friendly and affordable sanitary pads. The AFRIpads menstrual kit is a set of four washable cloth pads that can be reused for about a year.

Last July it also launched a retail brand, SoSure, to be sold commercially in Uganda through shops, pharmacies and supermarkets. The business has about 150 full-time employees, the vast majority of whom are young Ugandan women, and the product is manufactured locally.

In Masaka, a town about two hours southwest of Kampala near the border with Tanzania, AFRIpads has four factories. Phionah has worked in one as a supervisor for more than a year. Until then she had been tearing up pieces of cloth to use each month. Now, she is using sanitary pads for the first time, and she is helping to make them, so that other girls and women in Uganda can do the same.

Series concluded. This article was supported by a grant from the Simon Cumbers Media Fund