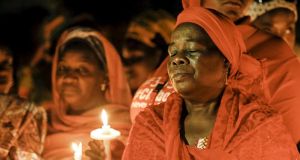 A vigil this week in Abuja, Nigeria, for the girls who were abducted by Boko Haram from a secondary school in Chibok. Photograph: Afolabi Sotunde/Reuters

The International Criminal Court (ICC) has been asked to investigate the abduction a year ago of 276 Nigerian schoolgirls by the Islamist militant group Boko Haram as a possible case of genocide against the country’s Christian community.

The appeal to ICC prosecutor Fatou Bensouda, by the influential Global Justice Centre in New York, came coupled with a warning that such kidnappings are a strategy increasingly being used in Iraq and Syria by groups such as Islamic State.

In a letter that is scathing about the inaction of the international community, Global Justice Centre president Janet Benshoof, Harvard lawyer and a member of the US Council on Foreign Relations, says “there has been no internationally motivated effort” to rescue the schoolgirls.

“This demonstrates the enormous gulf between the global concern for women and the political will to do anything about it,” she says.

The essence of genocide, it says, is not simply mass killing, but “the intent to destroy a national, ethnic, racial, or religious group. Removing children from a group destroys its future, and has been a tool of genocide for as long as the legal concept has existed.”

On that basis, says Ms Benshoof: “If prosecutor Bensouda examines Boko Haram’s gender-based abductions as genocide, it would put all countries unequivocally on notice that genocide is occurring in Nigeria. It would also send a powerful message to other perpetrators, including terrorist groups in Iraq and Syria who are increasingly using the kidnapping of young girls and woman as a tool of their campaign of terror, that genocide will not be tolerated.”

She said while the abduction of the Nigerian schoolgirls on April 14th, 2014, had ignited global outrage and the social media campaign #bringbackourgirls, the inaction since had demonstrated there was “no accountability”.

“The young Chibok schoolgirls have been living lives of daily terror and torture, including rape, forced conversion to Islam, forced marriage, forced pregnancy, and sexual slavery,” she said

Following the collapse of the Kenyatta case and the subsequent suspension of the case against Sudanese president Omar al-Bashir, Ms Bensouda also decided this week that the basis for opening a preliminary investigation into foreign fighters joining Islamic State was “too narrow at this stage”.

However, the GJC letter notes that Boko Haram recently “pledged allegiance” to Islamic State, so that opening an investigation into the Chibok schoolgirls could allow a broader point to be made about the allegedly genocidal tactics being employed more widely by Islamist militant groups.