Why do Irish people not eat more fish? 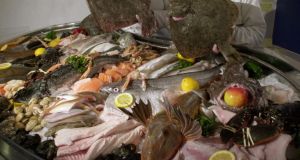 In a country that is surrounded by fish in the sea, the fish consumption is unusually low. Photograph: Alan Betson/ The Irish Times

In a country that is surrounded by fish in the sea, the fish consumption is unusually low and most of our fish is exported to countries that are more welcoming to it. It’s hard to pinpoint why this is when we are able to export so much and fresh fish is so accessible for us. But why do Irish people not eat more fish when it’s so available?

“I think the key is education,” said Mona Wise, food blogger and columnist. “People don’t know what to do with fish. We’re afraid to cook it even though it’s the quickest thing to cook.”

Wise, who has a food column with her chef husband, Ron in The Sunday Times, said it’s not the taste that deters us from fish. “Irish people love smoked salmon, and that’s one of the strongest tastes for fish, so it’s not that they don’t like the taste.”

Wise said Irish people have a developed palette and they have come away from bland tasting things, so she does not believe a lack of consuming fish is because they don’t like the taste of it.

She said the key is to teach people how to cook fish dishes so that they don’t shy away from eating it. Wise said when she was in school they learned one fish dish and “it’s really sad that that is still the case in schools.”

“Every secondary school student should be shown how to cook easy fish dishes,” she said. “People have been stuck on meat and potatoes for too long. I think a lack of education is the main reason we don’t eat enough fish.”