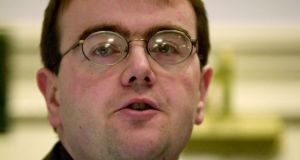 “Ourselves and a whole range of organisations have come together on the Alcohol Health Alliance and that’s the first time that’s ever happened,” says the National Youth Council’s James Doorley. Photograph: Alan Betson

One of the most fervent opponents to Diageo’s involvement in the controversial Stop Out-of-Control Drinking campaign says some unexpected positive developments have come from the initiative.

Despite rallying opposition to what was described as a cynical move by the drinks giant earlier this year, National Youth Council of Ireland deputy director James Doorley believes the resultant establishment of the Alcohol Health Alliance as an independent policy advisory body provided a bright spark from the heated dispute.

“From our perspective, the positive thing is that ourselves and a whole range of organisations across civil society have come together on the Alcohol Health Alliance and that’s the first time that’s ever happened. That’s a positive outcome in terms of saying,‘look, we’re no longer willing to stand by and let the drinks industry decide and dictate health policy in Ireland’,” he said.

Launched in February, Stop Out-of-Control Drinking was funded and spearheaded by Diageo and brought together a range of healthcare professionals and charity representatives in an attempt to warn members of the public about the adverse consequences of excessive alcohol consumption.

The campaign suffered a series of blows within its opening few weeks as health commentator Dr Ciara Kelly and psychologist Krystian Fikert withdrew their involvement.

However Peter O’Brien, a corporate relations director with Diageo, said today the campaign to combat problem drinking in Ireland was very successful, and he believes some of the criticism it elicited was “over the top”.

“I think it’s been hugely successful. Over 1,000 people have gone out to public meetings, they’ve voiced their opinions and it’s up to the campaign itself to decide what kind of recommendations they want to take from that,” said Mr O’Brien.

Diageo’s director for Ireland announced he was stepping down from the campaign at the end of March amid questions over its independence, but Mr Doorley believes assertions from the company that it was taking a step back were proven to be disingenuous by today’s remarks.

“I’m really surprised that two months ago Diageo said they were taking a step back, but clearly they’re very much in the driving seat and running the campaign still... if they’re saying it’s a success they’re clearly still very much involved.”

Stop Out-of-Control Drinking also used the tagline “Role Models” for its online presence, but following a high-profile public relations campaign both the Role Models website and social media feeds have remained largely dormant over the past month.

Mr O’Brien added that it is now in the report phase, and recommendations will be taken from the findings compiled by campaign spokesman and Barnardos chief executive Fergus Finlay.