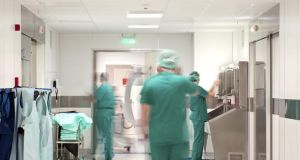 Neurosurgeons who treated the pregnant woman at the centre of current High Court proceedings recommended her life support be switched off after determining that she was clinically dead.

However, lawyers for the Health Service Executive became involved after another member of the medical team treating the woman expressed concern about possible legal issues arising in the case, The Irish Times understands.

The woman’s father is expected to ask the court to make her a ward of court, a move that would allow him to take over the administration of her affairs.

Her family have been seeking to have her life support switched off but the HSE, acting on legal advice, is keeping her alive at a hospital outside Dublin.

The father of the woman’s unborn baby is also understood to be in favour of switching off her life support, though he is not party to the proceedings before the president of the High Court, Mr Justice Nicholas Kearns, on Tuesday.

The case raises issues relating to the right to life of the unborn, and in particular whether switching off life support would breach the constitutional rights of the foetus.

The woman, in her mid to late 20s, suffered a brain trauma a number of weeks ago. She was taken to Beaumont Hospital, the national neurosurgical centre.

At Beaumont, the medical team followed standard practice for determining whether an unresponsive patient is clinically dead. They were unable to carry out an apnoea test, the standard investigation for confirming brain death – which involves taking a patient off the ventilator for a short period – because of the effect this could have on the foetus.

Doctors carried out a cerebral angiogram to determine blood flow through the brain and made the finding that the woman was clinically dead.

However, the interpretation of this test is highly complex, according to medical sources, with the risk of false positives. This has raised concerns in some quarters that a decision to switch off life support could be open to legal challenge.

In the High Court on Tuesday, Mr Justice Kearns can confer wardship on the woman’s father if he is satisfied, based on medical evidence, that she is incapable of managing her own affairs.

When a person is taken into wardship, the State, through the courts, takes over the administration of their affairs and appoints a committee to do it day-to-day. Usually, the person who makes the application – in this case, the father – is the person authorised to act as that committee.

Wardship – one of the requests outlined in the High Court application by the woman’s father last week – would give the courts a significant role in decisions about the woman’s treatment. The court could decide wardship is not appropriate in this case and make a different order.

A minimum of five judges must sit on constitutional cases in the Supreme Court, and the practice in recent years has been for seven judges to hear cases of importance.

The HSE said it had agreed with the woman’s family that a review be conducted of her treatment, as part of its national incident management policy.This follows concerns raised by her family over the length of time that passed before a Cat scan was carried out when she originally presented at her local hospital.