We can paint homophobia completely out of existence

Opinion: For lesbian and gay people equality is not ideological but a very practical matter in their lives 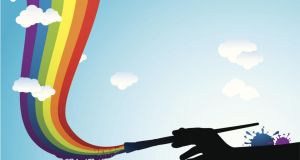 There has certainly been progress in Ireland in recent years in regard to the rights of gay men and lesbians. Nevertheless, it is safe to say that homophobia has not gone away. Not fully. Not yet.

There has been of course significant controversy recently on this subject, on what is called “the liberal agenda” and on the precise meaning of “homophobia”. As we move towards a referendum in 2015 on the right to marry, it is crucially important that the debate we have is grounded in the realities of what it is to be lesbian, gay or bisexual in Ireland today.

Most gay people don’t see the right to marry as an abstract debate on liberalism and conservatism, but as being about the most fundamental civil and human rights that exist: the right to love who you wish and to help and protect the people that you love.

Equality for lesbian and gay people in this country includes the right to be able to live your life on an equal footing with your heterosexual fellow citizens; the right to marriage as recognised under our Constitution; to be free from harassment and discrimination; and the right to parity of esteem. This is an agenda of equal civil rights and equal human rights.

Those opposing such progress for gay people are, in effect, opposing equal citizenship, equal civil rights and equal human rights. There seems to be a strange lack of human empathy – or indeed a lack of understanding of cause and effect – involved here.

When some commentators say we are not entitled to full equality under the Constitution – in effect saying that our relationships are of a lesser value than theirs and that we are not entitled to equal respect – they then seem surprised, upset, “hurt” even when they encounter a robust response, including the challenge that their views are based on prejudice.

It’s not surprising that lesbian and gay people get angry because we are not debating abstract ideas. These issues affect us and the people we love in the most vital areas of our lives.

The response of those in any minority community whose aspirations are discounted and diminished is of a quite different order to the upset of the privileged when their prejudices are challenged.

Destructive influence
Homophobia does exist. There are prejudices against gay people in the same way that racism or sexism or anti-Semitism exists. And this systemised anti-gay prejudice has similar destructive impacts on people’s lives and diminishes us all as a society.

As gay people, we are excluded from some of the basic freedoms that others can take for granted. For example, even the most privileged gay couple lacks the everyday civil right of being able to walk down the street holding hands.

Anti-gay prejudice restricts and diminishes people in their ordinary everyday lives and is particularly damaging to the more vulnerable. Mary McAleese, as president, highlighted this, saying “there is still an undercurrent of bias and hostility which young gay people must find deeply hurtful and inhibiting”.

In Irish schools, half of all LGBT students have been called abusive names. Research shows that the most common concern for older LGBT people is being placed in a nursing home because of fears of a homophobic environment that won’t respect their identity and their same-sex partner. Four in five LGBT people have been personally harassed (name-calling, bullying, ridiculing) because of their identity in the last five years, of whom a quarter experienced harassment six times or more in the last 12 months.

Long journey
At the same time, great progress has been made in Ireland in combating prejudice and discrimination against gay people. The LGBT community and wider Irish society have been on a great transformative journey.

I grew up in a society where gay people were almost completely marginalised and silenced; where we were criminalised. It now seems bizarre that it was only in 1993 that gay people were decriminalised in this country. That was followed by powerful equality legislation. In 2010, all political parties supported the passage of civil partnership, which went as close to marriage as was possible within the constitutional limitations.

The overwhelming public support for the 1,500 civil partnerships that have already taken place in every county in Ireland has transformed the visibility and status of lesbian and gay relationships. Now, the love and commitment of lesbian and gay couples is increasingly seen by the vast majority of Irish people as the same as that of other couples.

Resulting from the progress that has been made, gay people are far more empowered. They are far less willing to put up with discrimination or exclusion from key constitutional rights such as the right to marry. And rightly so.

Since the early 1980s, I have spent much of my life campaigning for equality. Every inch of progress was hard-won – it was doggedly and actively resisted by influential organisations and individuals, lay and religious, who even campaigned for our continued criminalisation. Later they used all their influence to try to ensure that our loving and intimate relationships would have no legal protections – they failed in that too.

While the strength of homophobia – its power to impose its prejudices on our society, to restrict and diminish the lives of gay people – has declined, it has not yet gone away. Time and time again rejected by the Irish people, the Oireachtas and most civil society organisations, homophobia still exists.

I have said that our goal is to make being lesbian or gay in Ireland unremarkable so that, for example, a gay couple holding hands in the street would be so ordinary that it would hardly be noticed. Given all the progress that we have made in Ireland, I think this scenario is possible. Anti-Irish prejudice was a virulent force in the US and now does not seem to exist.

Anti-gay prejudice could also go the way of the dodo and become extinct in Ireland.

Kieran Rose is chair of Glen, the Gay and Lesbian Equality Network