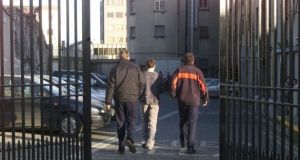 On Halloween night gardaí in riot gear were called to the Oberstown campus. Photograph: The Irish Times

Staff in the Oberstown child detention centre are to go on all-out strike in January citing regular violent incidents and insufficient protection for staff.

Some 128 staff –members of the Impact trade union – voted by 94 per cent to take industrial action from January 3rd, giving management time to make arrangements to secure the campus. The usual notice for strike is one week.

In a notice to members the union said: “Following consultation with gardaí on their ability to be able to provide security when all-out strike action is taking place a decision has been made by the Irish Youth Justice Branch and Impact to confirm the date of the action to be 3rd January 2017.”

Violent assaults are a “regular hazard” for staff at the north Co Dublin campus and staff had no access to protective clothing, said Tom Hoare, Impact assistant general secretary.

“Oberstown management is in denial about the level of risk to its staff. We are simply seeking the provision of adequate personal protective clothing and equipment for use when care staff encounter violence and the threat of violence. This would be uncontroversial in any other working environment let alone one with a long history, and continuing reality, of violent incident and assaults on workers.”

On Halloween night gardaí in riot gear were called to the campus when two teenage boys escaped from one of the units and climbed on to the roof, where they stayed for more than three hours, refusing to leave. Dublin Fire Brigade were also called to help bring the situation under control.

The most recent figures from the Department of Children and Youth Affairs show there were more than 100 violent incidents at Oberstown last year, about half of which were classified as “critical”. There were 3,005 sick days involving 65 staff members.

Minister for Children Katherine Zappone urged staff and management to work together to resolve the issues under the auspices of the Workplace Relations Commission.

“I recently visited Oberstown for on-campus meetings with young people, staff and management. There is no doubting the dedication, commitment and determination of all working at Oberstown to positively influence the young persons in their care.

“I concluded that staff and management would be open to taking on board any measures necessary to improve the environment for children at the Campus.”

Third person arrested in education board corruption investigation 09:40
Some schools missing up to 10 teachers over wait for Covid-19 test result – ASTI 09:20
Judge to formalise order blocking Ian Bailey extradition to France 07:41
Son (23) who died in suspected Cork murder-suicide was due to graduate 06:48
Ireland has one of the lowest breastfeeding rates in the world – report 04:01