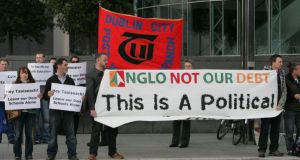 TUI members protesting outside the Fine Gael ard fheis in Dublin last year. The union’s president Gerard Craughwell has said it would vote against the Croke Park proposals at the meeting of the public services committee. Photograph: Cyril Byrne/The Irish Times

Members of the Teachers Union of Ireland (TUI ) have voted overwhelmingly to reject the proposed new Croke Park agreement.

The union said 86 per cent of members had voted against accepting the proposed new deal in a ballot.

The TUI also signalled that it would not be bound by a vote of the public service committee of the Irish Congress of Trade Unions when it considers ratification of the proposed agreement on April 17th.

Traditionally, if the public services committee - on a weighted majority basis depending on the size of individual unions - backs such a deal, those who have rejected it abide by the overall decision.

TUI president Gerard Craughwell said the union would vote against the proposals at the meeting of the public services committee.

“The TUI position is that it is not for the public services committee to determine working conditions for members of unions who have rejected the proposals,” he said.

The TUI, which represents about 14,500 teachers and lecturers working at second and third level in the education sector, is the first public service trade union to announce the result of its ballot on the proposed new Croke Park deal. The union said two thirds of its members participated in the ballot.

Mr Craughwell said TUI members had considered the proposals on an extension to the current Croke Park agreement and had overwhelmingly rejected them.

“Our members have spoken and they have said enough is enough.

"TUI members, in common with other public servants, have made a major, measurable and verifiable contribution to the country's recovery. Teachers and lecturers are giving extensive additional productivity under the existing Public Service agreement.

“This is on top of the pension levy and pay cuts which have reduced the take-home pay of serving teachers and lecturers by as much as 20 per cent.

“The feedback we received from members during the ballot is that while the pay proposals are a big issue for them, a further major issue is the savage and unwarranted attack on working conditions and on the quality of public education.”

Mr Craughwell said the executive of the TUI would meet later this week to consider the outcome of the ballot. He said the union's next steps would also be debated at its annual congress next week.

Separately, a leading craft union has withdrawn its recommendation to members in the public service that they should support the new Croke Park agreement in a ballot.

The Technical, Engineering and Electrical Union (TEEU ) last week called on its 1,500 members in the public service to back the proposed new deal following a meeting of a consultative committee, made up mainly of shop stewards from across the country.

However The Irish Times understands the overall executive of the union - which primarily represents staff in the private sector - subsequently decided to change its stance on the proposed new Croke Park agreement.

The union is now sending out ballot papers to its public service members without any recommendation.

A spokesman for the TEEU said the union’s executive had decided it would be inappropriate to send a signal to employers in the private sector that it would be willing to accept cuts in working conditions in the public service.

It is understood the union in recent times has secured pay increases for members in some profitable parts of the private sector such as the pharmaceutical industry.

TEEU members in the public service - such as electricians, fitters and construction trade personnel - work mainly in the health and local authority sectors.

The Irish Times reported earlier this month that in a side deal to the main new Croke Park agreement proposals, the TEEU secured an increase in leave for some craft workers outside of Dublin who currently have 23 days’ holiday per year.

Under the side deal, if the agreement was passed, leave for all craft workers would be standardised at 25 days per year.