Greenery can increase house prices by 20% and make you feel younger, seminar told 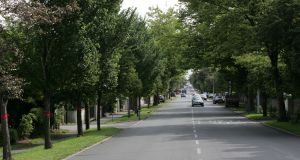 Mount Merrion Avenue in Dublin: a seminar, supported by Dublin City Council, the school of geography at UCD and others, heard there was a “gross inequality of beauty” in the capital’s streetscapes. Photograph: Frank Miller

Living on a street “full of trees” can increase the value of your home by 20 per cent, improve your emotional wellbeing and make your children more intelligent, a seminar on “urban beauty”  has been told.

The seminar, supported by Dublin City Council, the school of geography at UCD and others, heard there was a “gross inequality of beauty” in Dublin’s streetscapes.

“In the greater Liberties area of Dublin 8 there is three times more derelict or vacant land than there is green space,” said Paul Kearns, urban planner and joint founder of Redrawing Dublin, which hosted the event titled Who’s Afraid of Beauty? Mapping Dublin and the Inner City.

The project wants city-dwellers in the capital to think about how many street trees they have in their area and why it matters, in the hope that people, especially in poorer areas, will engage with Dublin City Council on the issue.

An app was launched, the StreetTree Green App, which will give users data on tree density in their area, to help communities to engage with accurate information on how green their area is.

“We all have a right to public beauty, and disadvantaged communities have an equal right to beauty in their neighbourhoods and on their streets,” said Mr Kearns. “Research has shown that living on a street full of trees can raise the value of a home by 20 per cent, is the equivalent of a €9,000 salary raise, can make you feel seven years younger and can raise the IQ of a child,” he said.

Kieran Rose, Irish Human Rights and Equality Commissioner, said research with children in Dolphin House, a Dublin City Council flat complex in Dublin 8, had found they were “very much aware” of the “dereliction, lack of cleanliness and absence of good public parks” in their area.

He said part of the experience of living in a neglected area, manifest in a lack of green space, was a sense of a “lack of aspiration” for the area and the people.