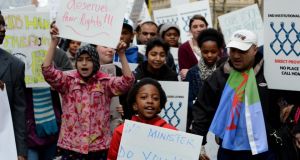 I’m sure I’m not the only one who, upon seeing the dramatic splash screaming “800 BABIES” in the Irish Daily Mail, stared at it incredulously. It took days for it to sink in, as I tried to find out more. I think it’s a version of this personal process that unfolded as a collective, national one.

Journalists who stuttered on this “story” will contextualise it on a news agenda that was coming out the other side of a rollicking election, and the implosion of the Labour Party leadership. The news came from an unfamiliar source, a local historian compiling research. The initial break came in a local newspaper, not a blockbuster Prime Time or an Irish Times front page.

It all happened so long ago. The facts were scant. They were allegations. Tread softly, I’d imagine news editors thought, because this seems so big – surely we would have known about it before? We still don’t know all of the facts, but we know the context. We all know by osmosis the horrors committed in this State. It’s oral history. We all heard our parents talk about dodgy priests, creepy buildings at the top of the town and babies not deserving of burial in consecrated ground, its soil fertilised with hypocrisy.

We recognise this old Ireland because it’s not just in the past, it’s just beneath the surface. Its echoes are in the baritone verdicts of judges who allow rapists to pay their way out of custodial sentences. Its echoes are in the tannoy systems at airport departure gates as pregnant women, fumbling with their boarding cards, make the journey to the UK for an abortion because our own State won’t afford them the rights to their own bodies and their own reproductive choices. All of this is about sexual shame and blame, condemning women. We haven’t got over that yet.

While the Archdiocese of Tuam shies away from knowledge in this instance, and while the Bon Secours nuns recruit the services of a public relations firm, and while politicians actually take the lead in calling for both State and Garda inquiries, we have transferred one past version of cruelty driven by religious dogma and sexism, to a present version driven by othering and – there’s no getting around this – racism.

Direct provision, the Orwellian term for institutions where asylum seekers are contained, is cruel and unfair. It denies people respect and freedom, and it needs to end. At the National Women’s Council agm on Friday, I met a young woman campaigning for the eradication of direct provision, “In 10 years’ time some taoiseach is going to stand up and apologise for direct provision,” she said as we chatted outside. “We don’t want an apology then. We want action now.”

We know about the present

We should ask ourselves: how on Earth can we collude in such a system through silence, when we know well the crippling shame that our old State and religious institutions brought on this country? If the past is prologue, then surely it’s not just about coming to terms with it. It’s not just about freeing ourselves from it so we can do justice, forgive and move on. It’s about learning from it, and acting on it right now.