The economy is growing – and so is poverty

Rising levels of consistent poverty are a legacy of the downturn 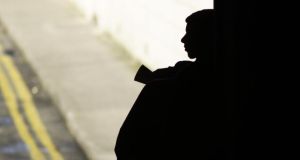 A boy begging in an alleyway in Dublin – the worst poverty rates were felt by lone parents, the unemployed, those out of work and children

The economy is growing, unemployment is falling and the clouds of austerity are parting. At least that’s the Government’s sunny sales pitch.

But fresh data also paint a darker picture: a rising number of people are affecting by grinding poverty.

The findings are contained in the Central Statistics Office annual survey on income and living conditions in 2013, published this week.

If evidence is needed of how the economic downturn has turned lives upside down and lowered expectations for many, it’s a good starting point.

It shows that 1.4 million people – or 30 per cent of the population – experienced enforced deprivation during 2013, more than double the rate at the start of the downturn.

This means these people were not able to afford at least two basic items from a list of 11 which include being unable to afford a winter overcoat or to adequately heat their home.

This measure has flaws. For instance, it’s blind to people’s incomes and only measures deprivation on a self-reported basis.

Many consider “consistent poverty” a more accurate measure of real deprivation. This includes people who are both living under the poverty threshold – which in 2013 was an after-tax income of €10,531 – and experiencing enforced deprivation. This shows just over 8 per cent of the population – almost 400,000 – were living in consistent poverty in 2013 – the rate in 2008 was 4.2 per cent.

The worst poverty rates were felt by lone parents, the unemployed, those out of work through illness or disability, and children.

The retired were well protected, by contrast, as governments tried to avoid cutting the pension at all costs. Children weren’t so fortunate. Almost 12 per cent of children were living in consistent poverty last year, double the rate at the start of the downturn.

What is worrying for the Government isn’t just the scale of poverty but the fact that key indicators rose in 2013 despite economic growth and job creation.

Minister for Social Protection Joan Burton has pointed to signs of improvement. The numbers at risk of poverty – those earning 60 per cent of median incomes – fell from 16.5 per cent in 2012 to 15.2 per cent in 2013. She also points to moves such as job growth, increases in child benefit and the back-to-work dividend as steps that will improve circumstances for low-income families.

Moves to protect core welfare rates and restore cuts may halt the growth in poverty and begin to reduce it.

But more dramatic and sustained steps may be needed to make radical inroads into Ireland’s rising poverty rates.