Some businesses including pubs close for Traveller funeral 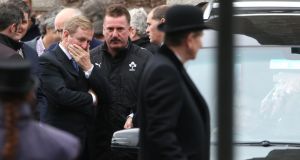 Taoiseach Enda Kenny at the funeral of Sylvia and Thomas Connors and their children Jim, Christy and Mary. Photograph: Patrick Browne

Taoiseach Enda Kenny and Minister for Public Expenditure Brendan Howlin have said they understand why business premises, including pubs, remained closed in Wexford yesterday while the funerals took place of five victims of the Carrickmines fire.

“Obviously, you’ve had incidents on some occasions where things have got out of hand. This is a great tragedy and, from speaking to the Travelling people there, they’re going their way once the burials have taken place in the graveyard,” Mr Kenny said.

Mr Howlin, who is a TD for Wexford, said: “I understand some public houses closing. I think maybe the unavailability of alcohol is not a bad thing.

“I know that a local community centre has opened to welcome the families immediately after the funeral, to provide soup and sandwiches.”

In Wexford, he said, there were “different reactions, some based on fear, some unfounded fears, some on experience, unfortunate experience that people have had, and others just in open generosity”.

Asked whether the housing of Travellers should be the responsibility of a central agency, Mr Kenny said: “I’m not sure about that. If you try to impose directions from central Government you lose out on the requirement to have local consent and agreement and consultation.

“The important thing is that there be a method of providing proper facilities for Travelling people, the same as anybody else.”

Referring to the problems securing a site for emergency accommodation for the survivors of the Carrickmines fire, when local residents forced Dún Laoghaire-Rathdown County Council to abandon its preferred site, he said: “In the vast majority of cases where you consult and explain to communities what needs to be done in an emergency situation, then agreement can be reached. Obviously they’ve come to a different solution in the Carrickmines case.”

Asked whether it was satisfactory that the temporary halting site in which the fire took place at Carrickmines had been in existence for eight years, he said: “It’s not satisfactory, no, but it was a temporary site.”

He added, “Even if it’s to be an approved temporary site, facilities should be such that they stand up to proper standards.

“On the other hand, if you look at the settled community you have fire traps in Priory Hall and allegations of inconsistency in terms of fire regulations in Longboat Quay.”

Mr Howlin said he felt the question of who should have responsibility for housing Travellers was a difficult one to answer. “Travellers obviously have to be provided with accommodation, but they have to be part of the community as well and I think it’s a process to make sure that there’s not downright hostility.”

He added: “Anybody who saw those coffins today would be heartbroken and we want an integrated community to ensure that everybody is provided with a decent standard of living, and that means local authorities have to step up to the plate.”

Such decisions had to be by negotiation, he said. “I don’t think you can do it by bludgeoning your way into any community, and it’s a slow process. It’s a process of reassurance as well, and that’s two-sided. Everybody has to lay their concerns out in clear and stark terms and have those addressed.”

He said he believed concerns among the settled community about the behaviour of some Travellers had to be addressed. “I think there’s an onus on people to recognise that’s a fact. The voices of Travelling people represent the vast bulk of decent, ordinary people, but they do also have to acknowledge that there are bad eggs in any community and those bad eggs, you have to talk about them.”