Dublin apartments were restored by the Peter McVerry Trust at a cost of €135,000

Six young homeless people have moved into apartments on Pim Street near Marrowbone Lane, Dublin, organised by the Peter McVerry Trust. The apartments were renovated with €100,000 in funding from French insulation company St Gobain. 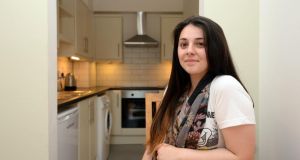 Emma (19) was homeless for a year, but now she is sitting on her sofa in her new apartment in Dublin. She moved in three weeks ago and plans to study childcare in college starting in September.

“Everything is better now. When you’re homeless you’ve no security,” she said. “At least now I know this is mine and I’ll be safe.”

Emma has moved into one of six social housing apartments in Rialto, Dublin 8, formally opened today by the homeless and housing charity Peter McVerry Trust.

The Dublin teenager lived in temporary homeless accommodation run by the trust for a year after she became homeless just after completing her Leaving Certificate in 2014.

She said she feels grateful she never had to go into the homeless hostels in Dublin city, as she didn’t think she would have lasted in one. “I’ve never touched drugs and I don’t even drink but I did think I would end up in one of the places in town because I couldn’t go home. Things were too bad to go home.” She said she was in shock when she was offered the apartment on the south side of the city. “It’s just pure stability I have now, instead of not knowing what’s going to happen.”

The apartments, which the trust has leased from Dublin City Council, were “in rack and ruin”, said Pat Doyle, chief executive of the trust.

Francis Doherty, also from the trust, said they have been planning the social housing unit for more than a year. French company Saint-Gobain contributed €100,000 towards restoration of the apartments, with the McVerry trust making up an additional €35,000.

Mr Doyle said every home created is important in alleviating the housing crisis for homeless people. “We are very proud to be able to hand over the keys of these apartments to six people who can now leave homelessness behind them,” he said.

“We’ll probably open two more hostels in the next six weeks. One is over on Camden Street and one is on the north side near Glasnevin, so that should be for families,” he said.

Mr Doherty said the profile of homelessness had changed. “The big issue is that homeless services are designed for single males of a certain profile and the system is now being asked to cope with families, children, and people with no history of mental health or addiction or anything like that,” he said.

“That’s the big challenge; the system is set up in one way and now the need has shifted.”