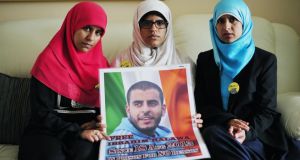 A sister of jailed Irish citizen Ibrahim Halawa is asking the Irish Government to demand the immediate release of her brother who has been in jail in Cairo since last August. Photograph: Aidan Crawley/The Irish Times

A sister of jailed Irish citizen Ibrahim Halawa will meet with the Minister for Foreign Affairs Charlie Flanagan this evening.

Khadija Halawa and her husband Nooraldin will ask the Irish Government to demand the immediate release of her brother who has been in jail in Cairo since last August.

Mr Halawa (18) was caught up in the riots in central Cairo which followed the deposing of the Muslim Brotherhood president Mohamed Morsi.

He was arrested and put in jail along with three of his sisters who have since been released from jail.

Ms Boylan told the European Parliament last month that the breath of support for her petition across the political spectrum was a “ sign of the serious breach of rights Ibrahim has been subjected to.”

“Having met with Ibrahim’s sisters who were also arrested at the time but subsequently released, it is clear to me how urgent it is that action is taken now for Ibrahim. The mass trials Ibrahim could be subjected to where neither he nor his defence lawyers are able to attend are unlawful and incredibly worrying.”

Mr Halawa (18) is due to stand trial on charges of belonging to a terrorist organisation, murder and torching a police station. His trial was postponed until August 12th for “technical reasons”.

His family maintain they were all innocent bystanders when they got caught up in the riots.

Somaia Halawa says there is no chance that her brother will get a fair trial in Egypt. “The Irish Government is trying to provide Ibrahim a fair trial to see his lawyer, but that’s not going to happen,” she said.

“I have been in jail in Egypt for three months. I never had a fair trial. I wasn’t able to talk to my lawyer or defend myself. I had hoped that the new Government was going to be better than the last one. Human rights in Egypt does not exist when you think this is a country which has held by brother for a year and not given him any chance to defend himself,”*

“For that reason we will ask for Charlie Flanagan to press for his release, nothing else.”

*This article was amended on August 2nd 2014